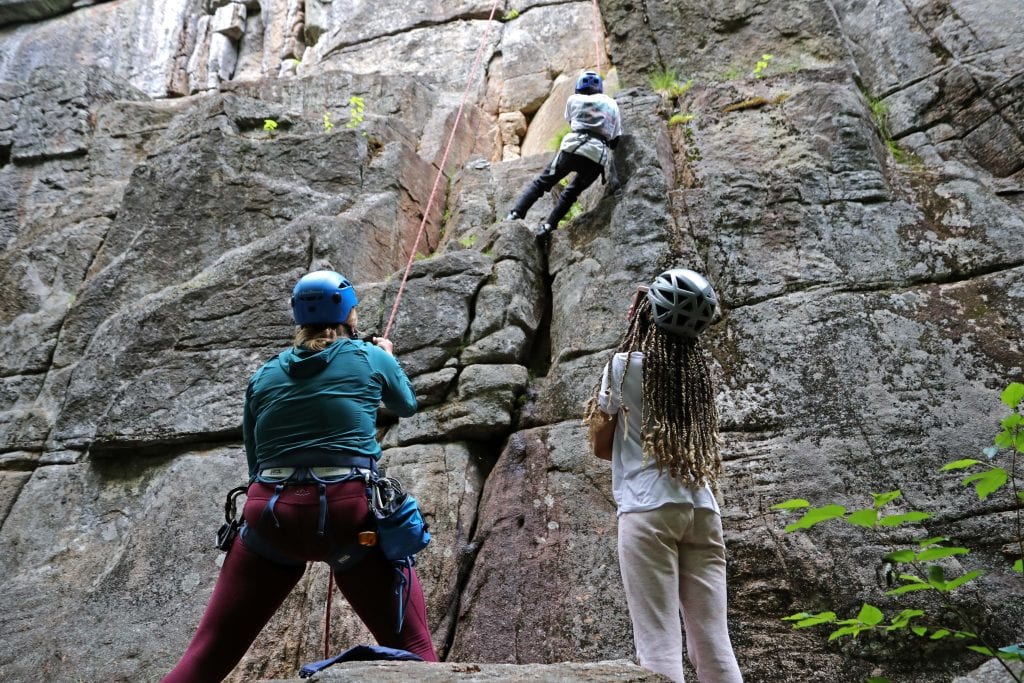 LAKE PLACID — An idea from one 8th Grade student found a new way to invite children of color to explore the Adirondack wilderness.

Sitting on the front porch last winter, the two discussed the lack of diversity Inyene has seen on hiking trails and at outdoor programs in Adirondack Park.

“And we wanted to do something, we decided to do a non-profit camp. The reason I wanted people of color to come to the camp mainly is because I don’t really see that many people of color in the outdoors,” the 13-year-old said, retracing her inspiration.

The week-long series of adventures welcomed 10 students of color here in June from Hempstead, a town in Nassau County just east of New York City.

“When I first came to North Country School, I wasn’t that into the outdoors,” Inyene said in a film short describing how she envisioned the program.

“Now that I’ve been able to experience all the things that I have, I want other people to have these experiences as well.”

The program included stargazing, kayaking, theatre improvisation, hiking, rock climbing, and taking in the splendor of the Adirondacks – an agenda inspired by the North Country School’s educational philosophy.

A non-profit project, Access Wild Places was designed to “provide total access to nature for kids who have little exposure to it in their daily lives,” the school said in introducing the program.

“Making the outdoors more accessible to everyone is one of the tenets behind the notion of ‘intersectional environmentalism’ – where sustainability and regeneration meet social justice,” Todd Ormiston, executive director at NCS said.

“Economically disadvantaged children often live in areas without access to green space. And a rising global movement of parents, educators, researchers, and health practitioners believes that universal and equitable access to nature is fundamental to our humanity.”

Ormiston enjoyed hosting Access Wild Places. And he is looking forward to opening discussions among schools across the country with similar nature access and resources.

“This is just one small program in the world, but it shows that making wild places accessible to all cultivates a broader sense of responsibility and collaboration for personal wellness, societal well-being, and the health of the planet,” the director said.

Day-to-day events were captured in a blog on the North Country School website, which chronicled the ebullience and awe that the young students felt with each new adventure.

From hiking Balanced Rocks to riding horses, or learning about the school’s garden and the sour taste of rhubarb, from kayaking to rock climbing, the students were wrapped in outdoor beauty, early summer air, and new sights and sounds.

Adventure leaders described the rock climbing experience this way: “Shouts of friendly advice and encouragement pushed each climber onward, with some reaching the top of the Crag to a round of applause.

“Climbing is difficult work, and it feels rewarding no matter how high you get. That sentiment was written across every child’s face—there was no failure here, only the sense of satisfaction that comes with seeing a challenge head-on as friends offer kind words of motivation.”

“Inyene knew, instinctively, that nature is not just a privilege for those lucky enough to live near it, but a human right,” he said.

“And in trying to bring people closer to the mountains, even for a short time, she is taking action on behalf of all of us: course-correcting for previous generations and protecting a home for future ones.”

NCS said Inyene loved introducing all of her experiences in the Adirondacks to the campers.

“It was awesome,” she said.

North Country School is a boarding and day school for students in grades four through nine. The campus and its affiliated summer program, Camp Treetops, are located on 220-acres in Adirondack Park.

NCS programs are nationally renowned for place-based humanistic education rooted in respect and responsibility for self and others, sustainable living, and natural life cycles.

Read the story on the Sun Community News Website.