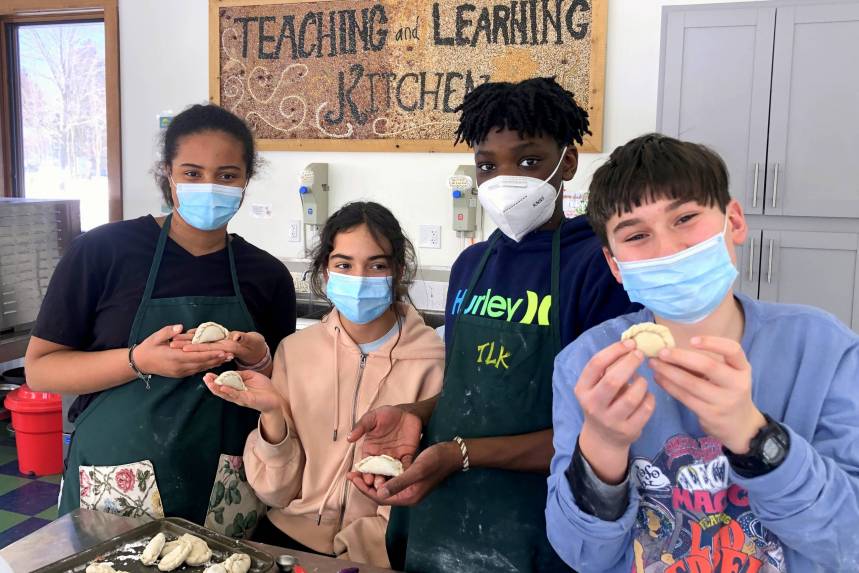 Photo: The “Perfect Dumpling” Intersession group cooks in the Teaching and Learning Kitchen.

Intersession Week at North Country School is a time when we take a break from our regular schedule to offer students the opportunity to focus on a specific area of interest, or to try something completely new. Groups spend mornings and afternoons in small sessions centered around the arts, the outdoors, and our farm-and-garden program before coming back together at the end of the week to share what they’ve learned and created.

Throughout the course of the week, students whipped up creative recipes, choreographed dance routines, mastered the fundamentals of ice hockey, formed rock bands, and staged robot battles. Others sculpted imaginary creatures out of clay, designed innovative theater sets, and delved into the magical world of Harry Potter. Everyone was excited to share stories from the week’s adventures during Saturday’s Intersession Showcases, which highlighted the students’ creativity and strong spirit of collaboration. It was a great way to end the winter season before heading into spring break.

We’ll return to our mountain campus at the end of March to begin our Spring Term, which will include NCS traditions such as community-wide maple sugaring days, the Range-in-a-Day hiking trip, and our annual spring theater production.

Note: The next #ThisWeekAtNCS update will be posted after we return from spring break in late March. 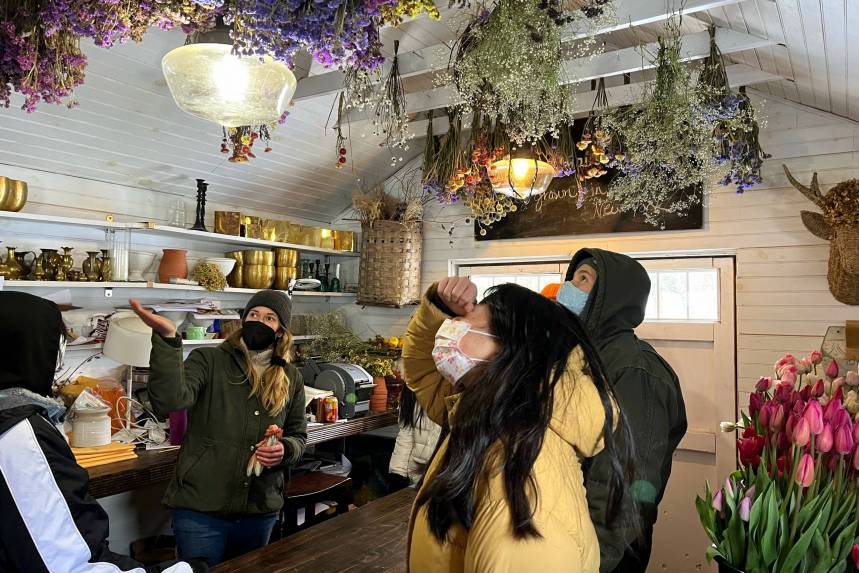 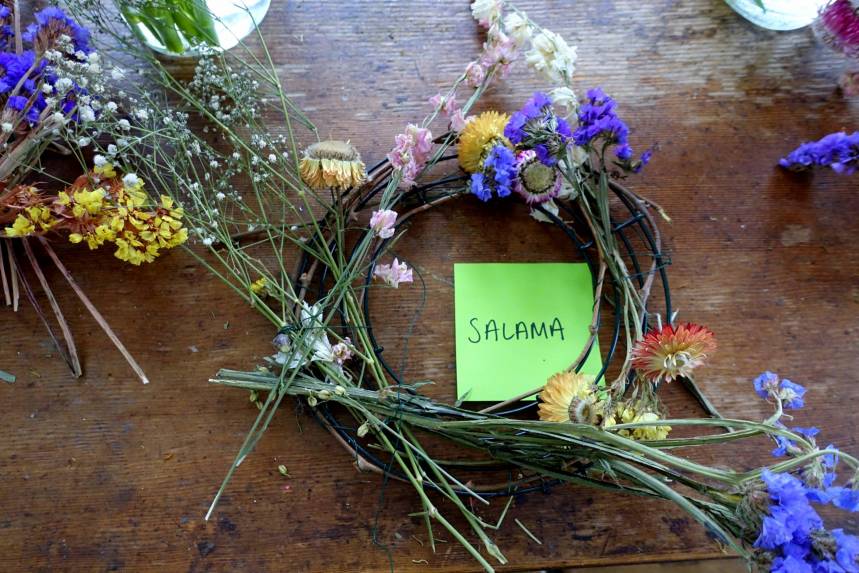 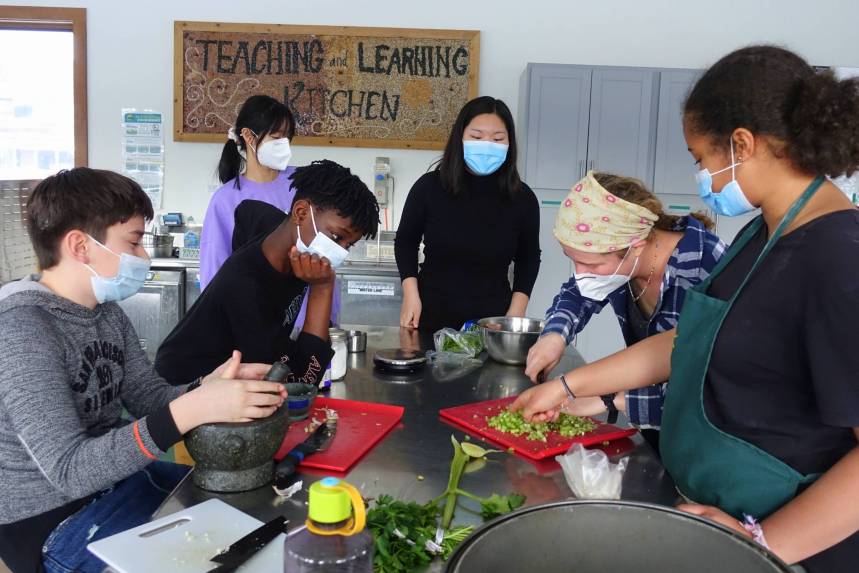 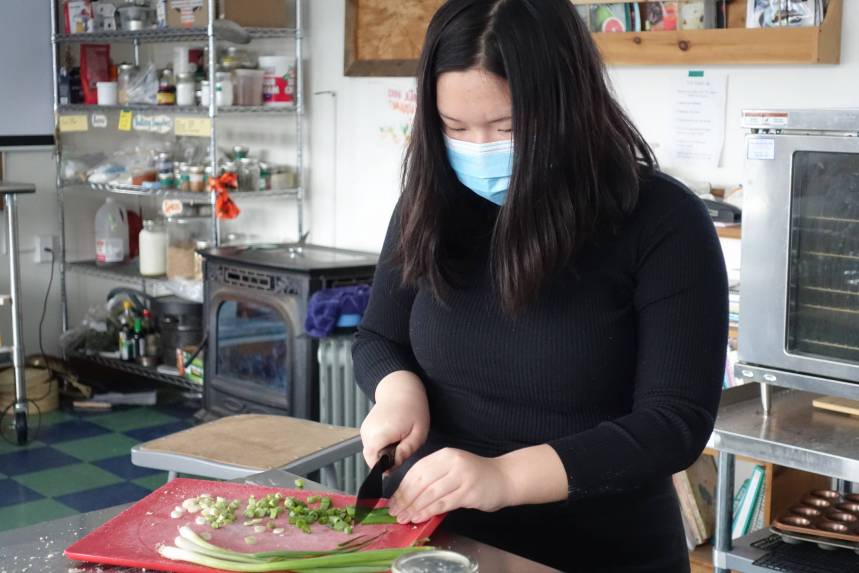 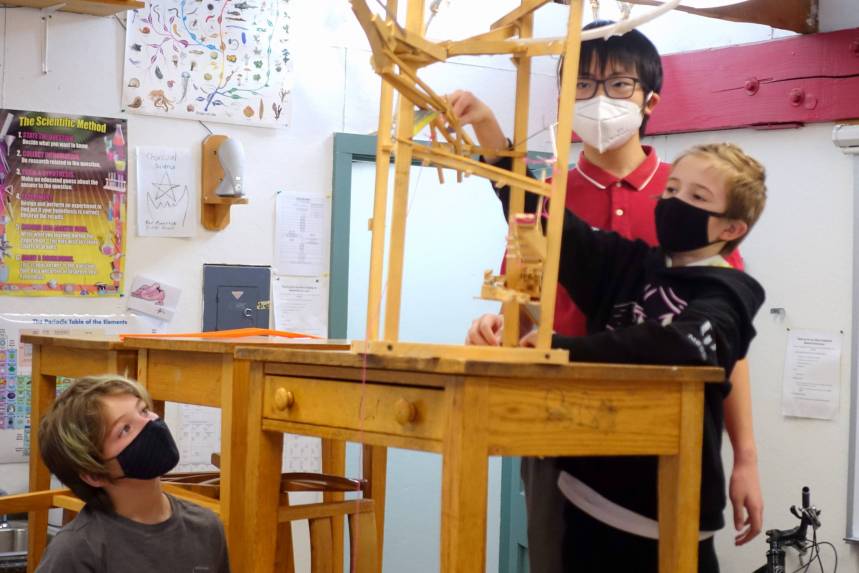 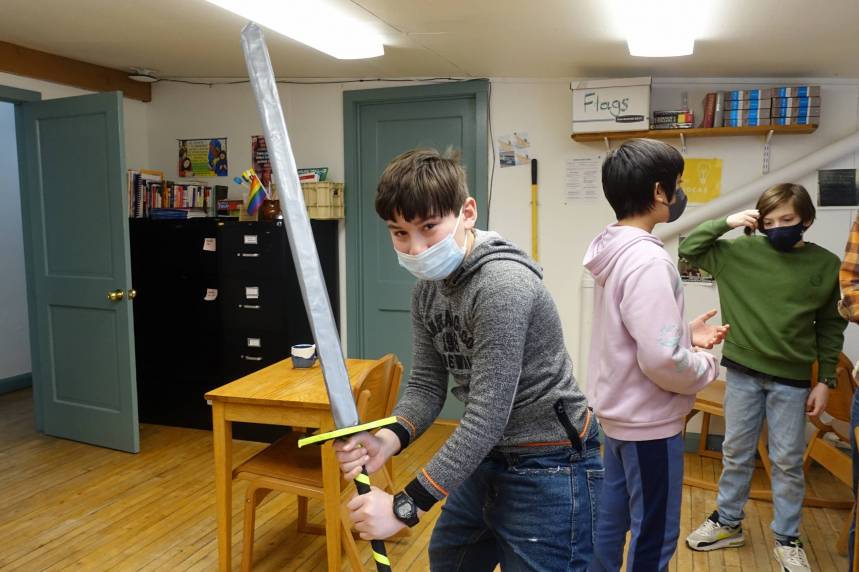 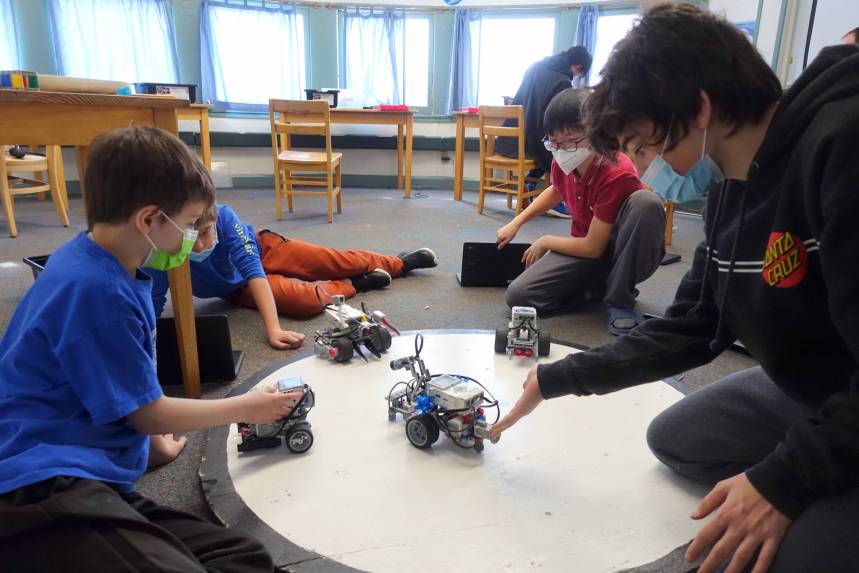 Many of our Intersession groups ventured into brand new areas of interest this week, or gained a deeper understanding of some of their favorite subjects. In Garden Manager Kim’s “Fun with Flowers” session, students learned about the role colorful blooms play in the local farming community and in our own garden, then used flowers to make beautiful decorations, homemade soap, and food and drinks. The “Perfect Dumpling” group learned about the many kinds of dumplings eaten around the world, then used the cooking knowledge and skills acquired in our Edible Schoolyard classes, along with ingredients from our farm, to prepare different sweet and savory recipes.

Several of our groups used their art and construction skills in new ways. The “Magnets, Marbles, and Simple Machines” group spent the week building sprawling obstacle courses using found materials, while the “Fantasy Weapons and Armor” group prepared for mythic battles by cutting, gluing, and taping together swords, axes, and shields. Students in the “Robotics” sessions engaged in a different sort of battle, pitting their individually-designed robots against one another to test various defensive and offensive strategies. 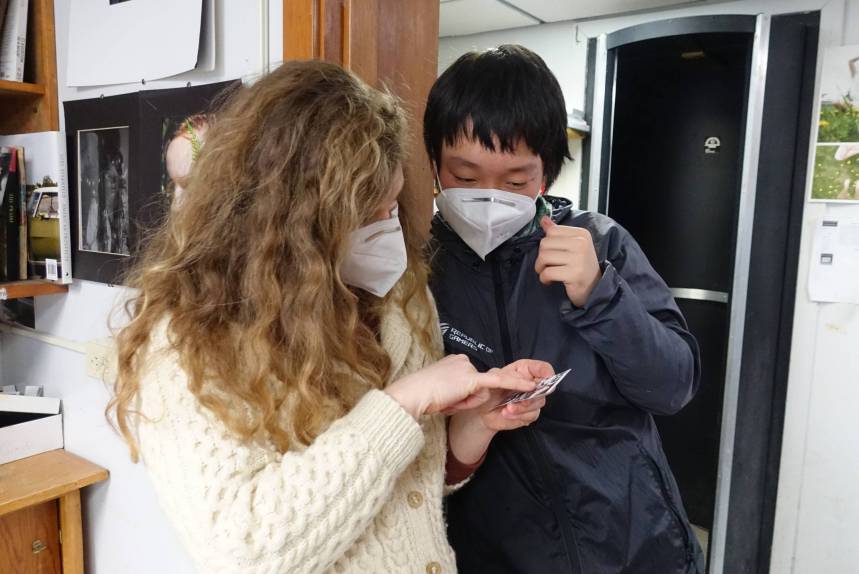 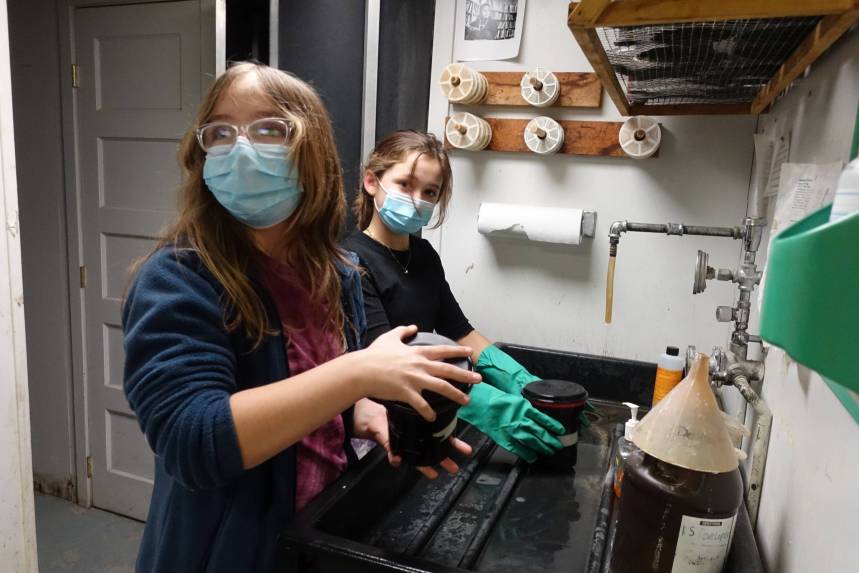 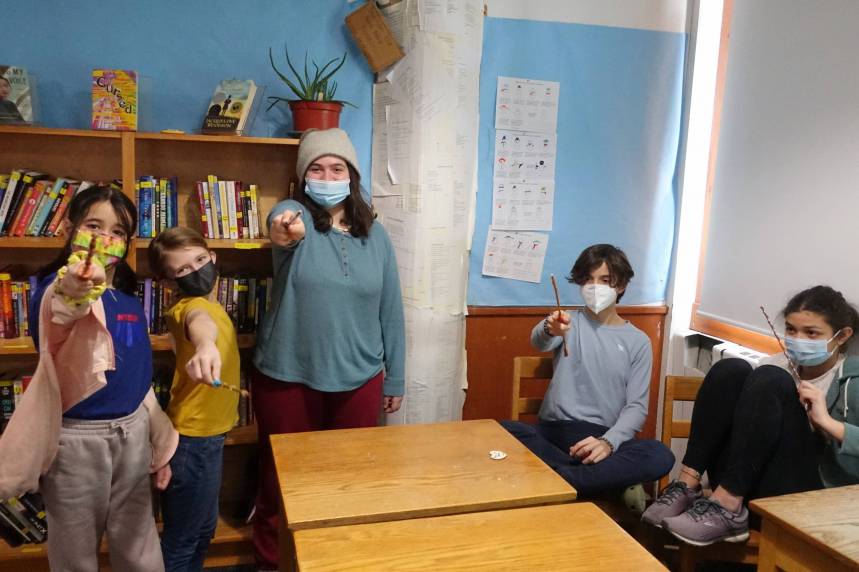 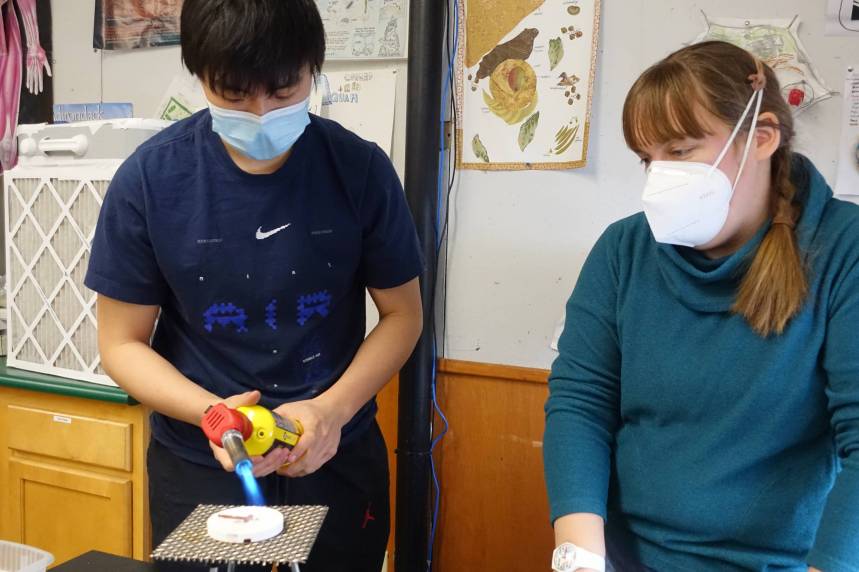 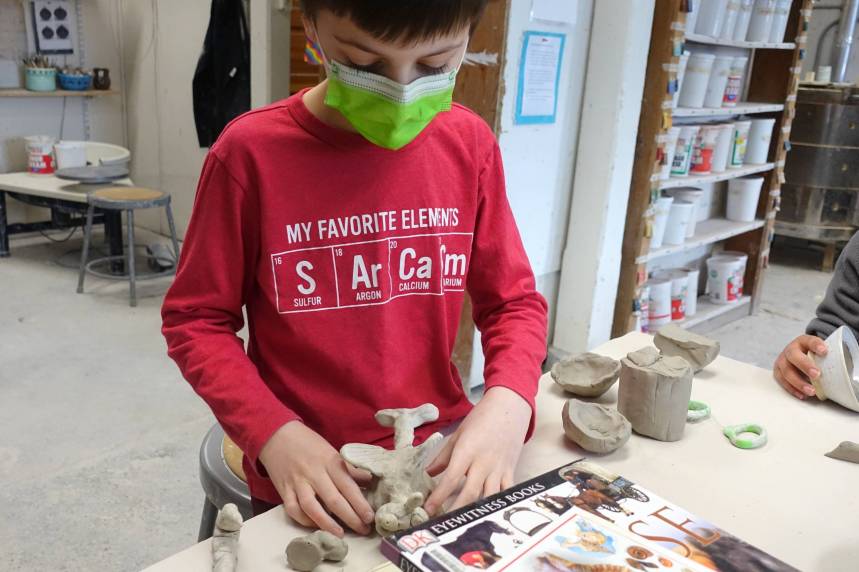 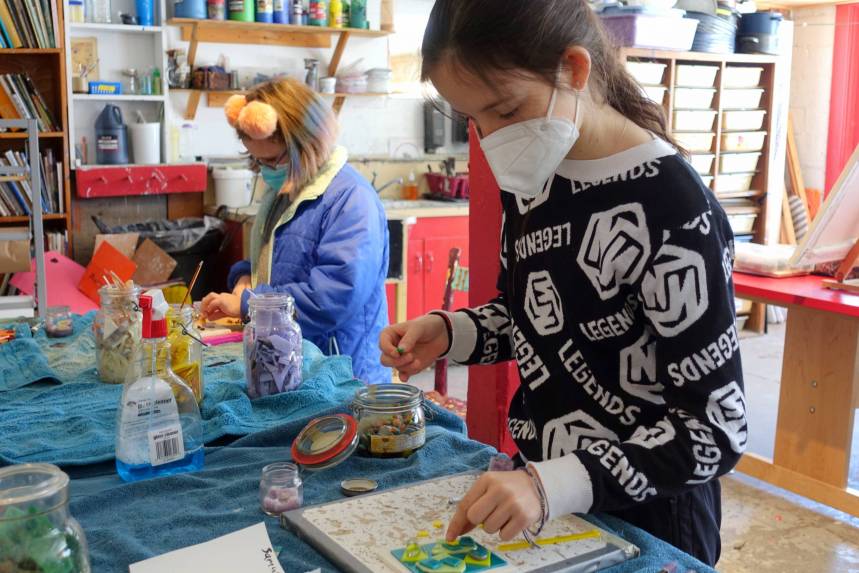 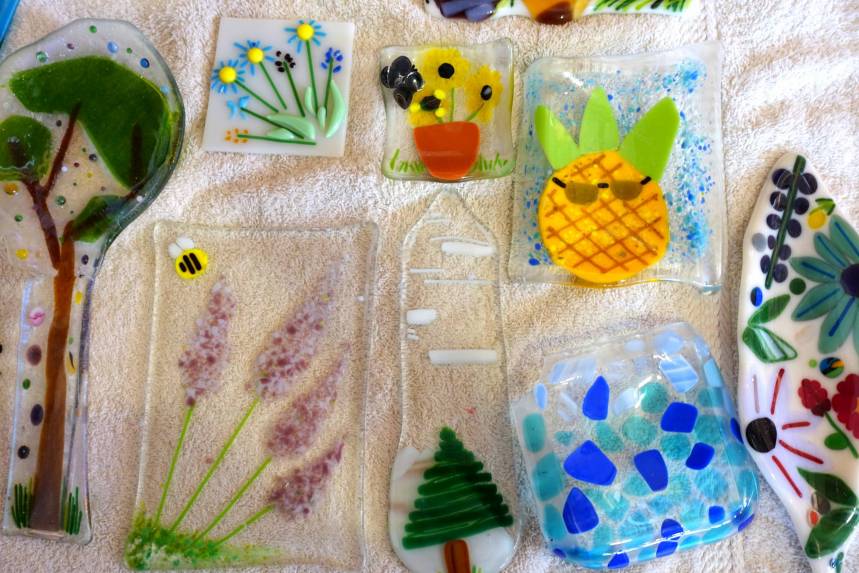 Top: Sierra looks at a test print with David in the “Experimental Darkroom” session. Middle 1: Katie and Adela develop film. Middle 2: The “Hogwarts Experience” group with their homemade wands. Middle 3: Meredith teaches Jeff how to solder. Middle 4: Tiago sculpts an animal during the “Creating New Ceramics Species” session. Middle 5: Laurie and Eleanor make glass art. Bottom: Glass art that has been fused in the kiln.

Artistic creativity was on full display around campus this week. Our avid photographers expanded their understanding of different developing and printing processes in the “Experimental Darkroom” session, while Harry Potter enthusiasts in the “Hogwarts Experience” group spent the week whimsically recreating the world of Hogwarts by constructing wands, making spell books, and designing and sewing robes. Students in the “Metalsmithing” session hammered, cut, and soldered metal into intricate jewelry and decorative pieces. Down in our studio spaces, groups sculpted fantasy creatures out of clay, and melted colorful glass pieces into vibrant wall hangings, necklaces, earrings, and coasters. 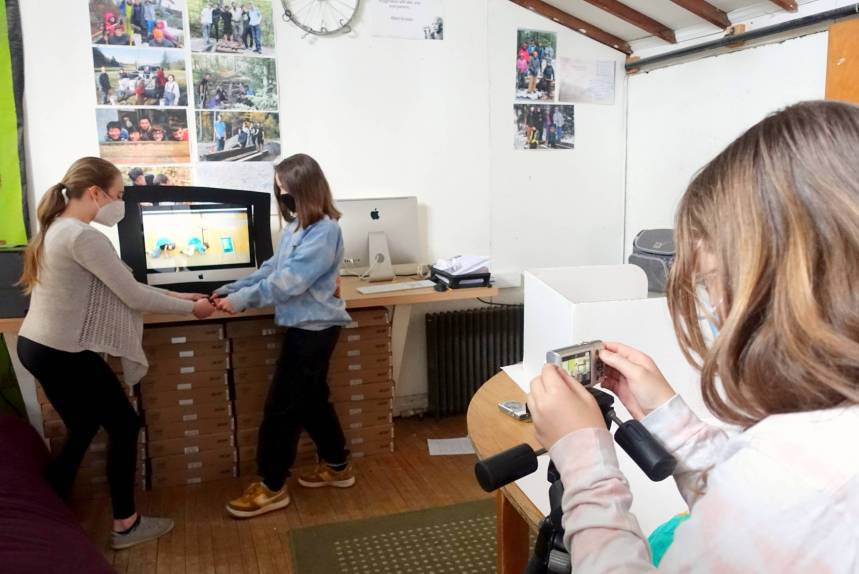 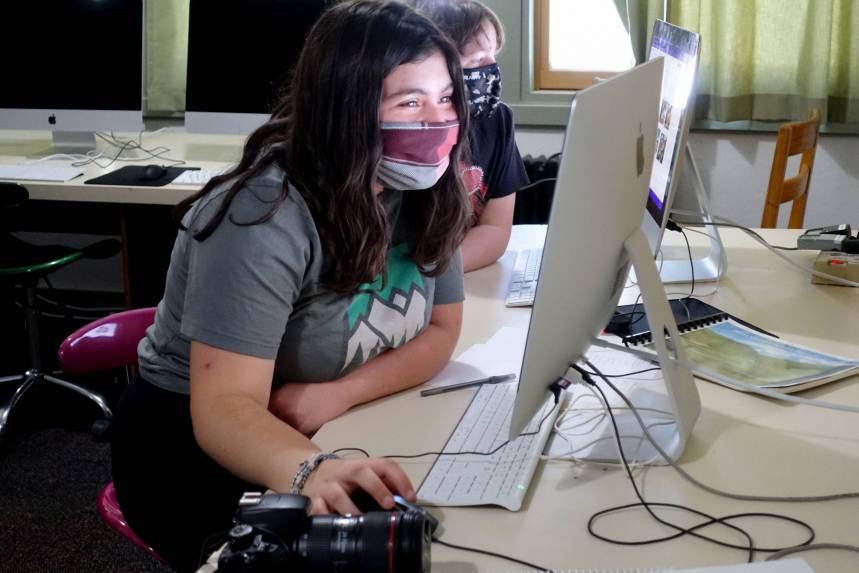 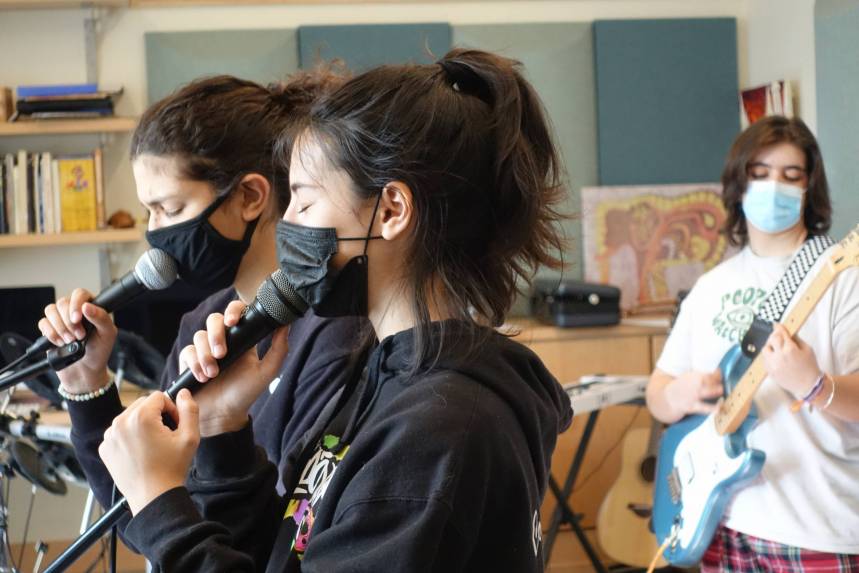 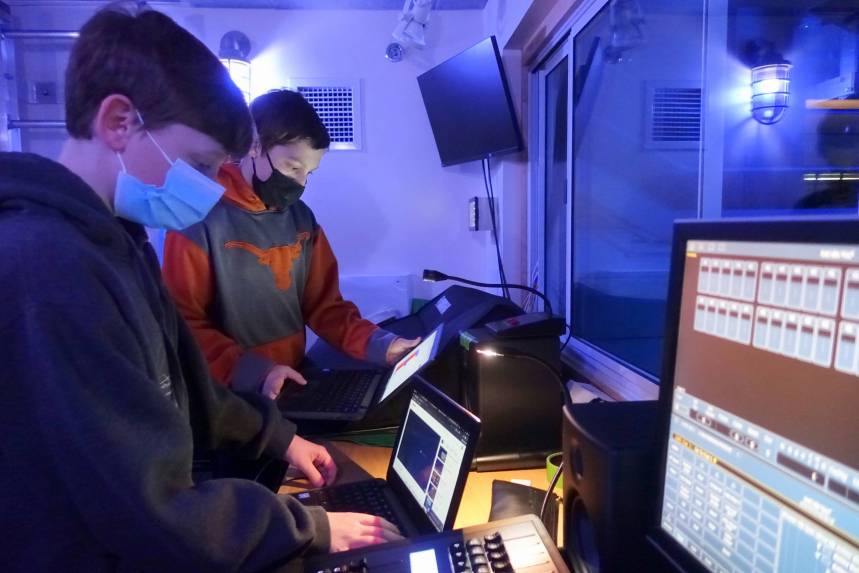 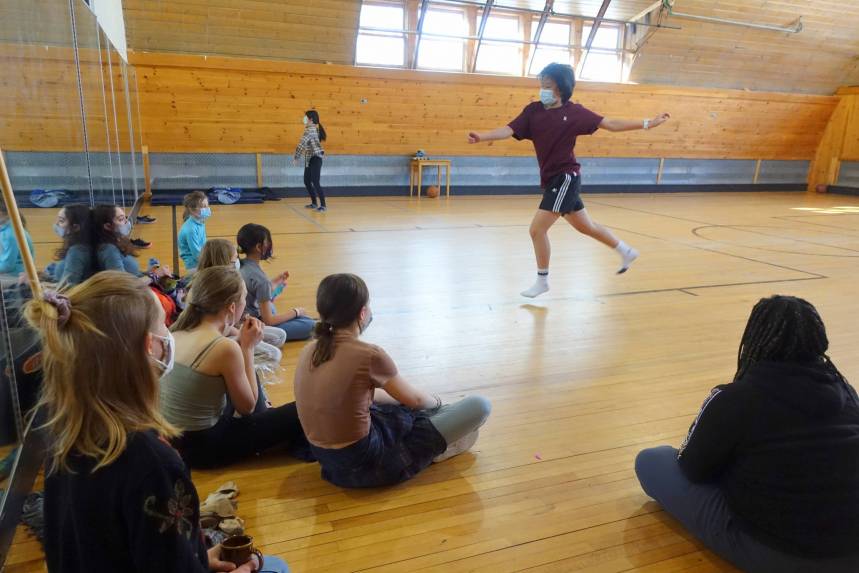 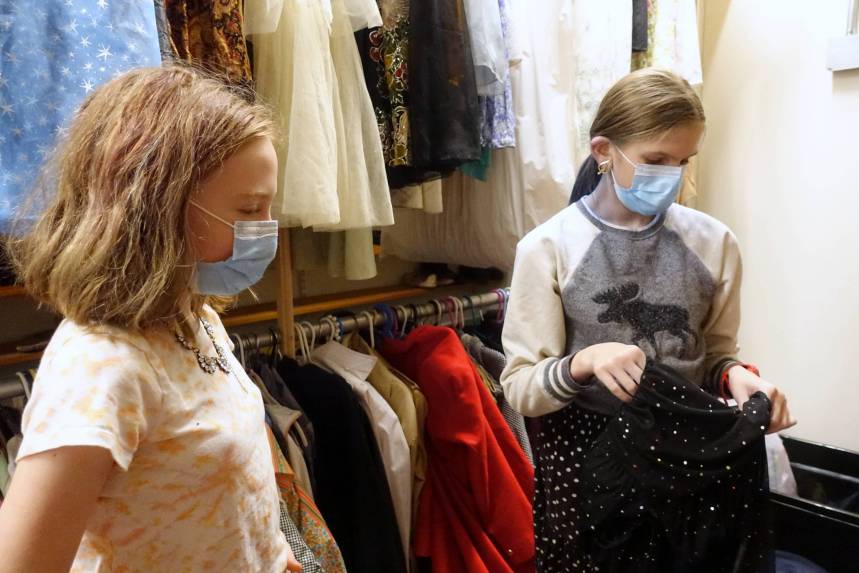 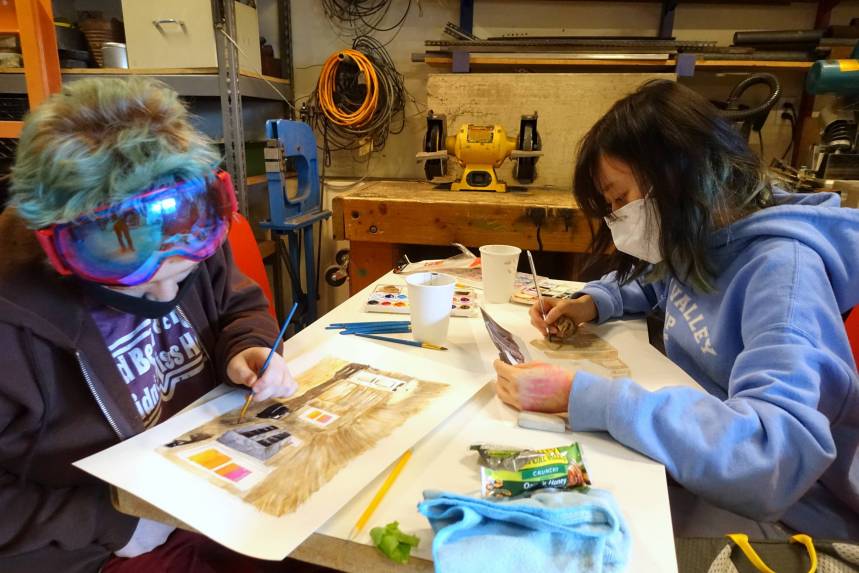 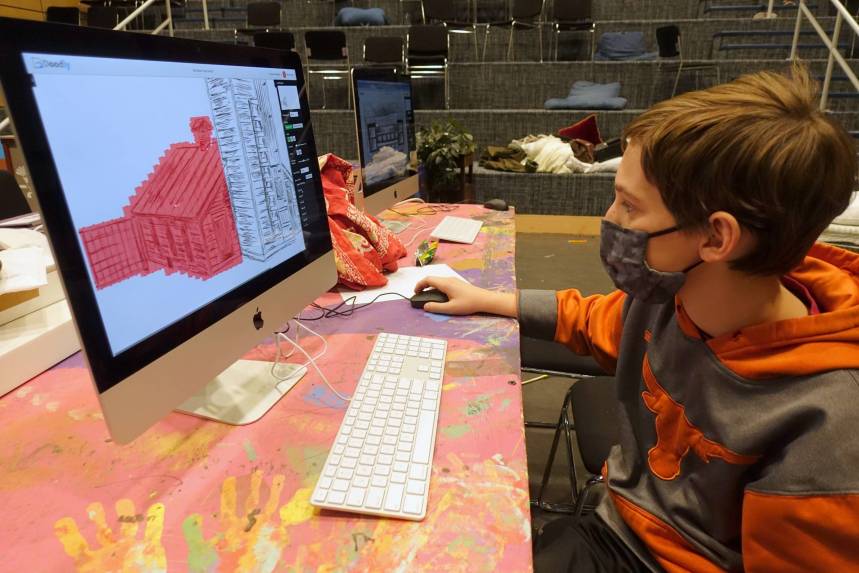 One of our favorite parts of Intersession is seeing our students work together toward common goals. In the “Stop Motion Animation” session, groups photographed and edited together still images to create short films, while “Yearbook” session students worked on the NCS end-of-year publication. Our two “Flash Band” sessions spent the week practicing songs with their newly-formed musical groups, while students in the “Retina Burn” session designed lighting schemes for the Flash Band Showcase performances. Our talented student-dancers choreographed collaborative routines that they also performed for the community during Saturday Showcases.

Meanwhile, two of our groups, “Costume Design” and “Stage Craft,” spent the week preparing for the Spring Term theater production of Fantastic Mr. Fox. Our costume enthusiasts designed and assembled concepts for the different animal characters in the play, while Stage Craft students used hand-drawn and painted images, along with projection mapping software, to create multi-layered backgrounds for the barnyard tale.

To view one of 8th-grader Mia’s stop-motion films, click here. 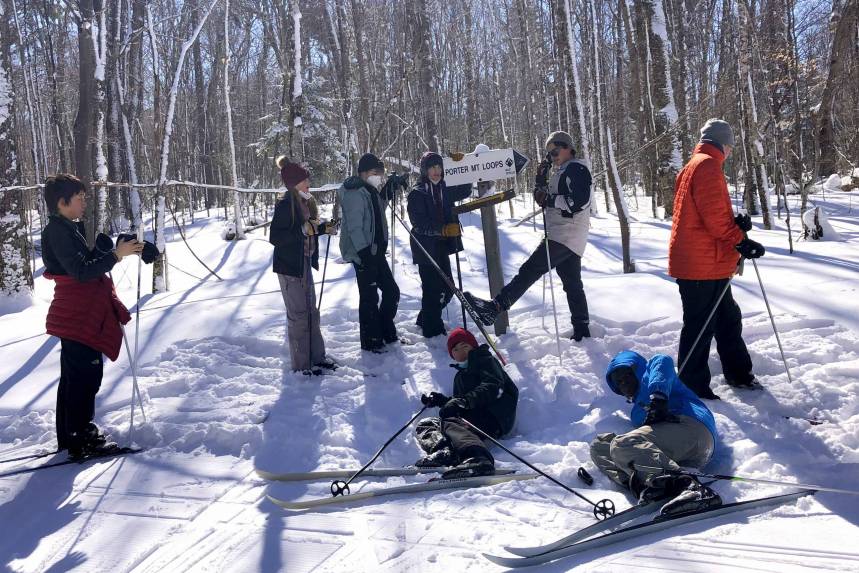 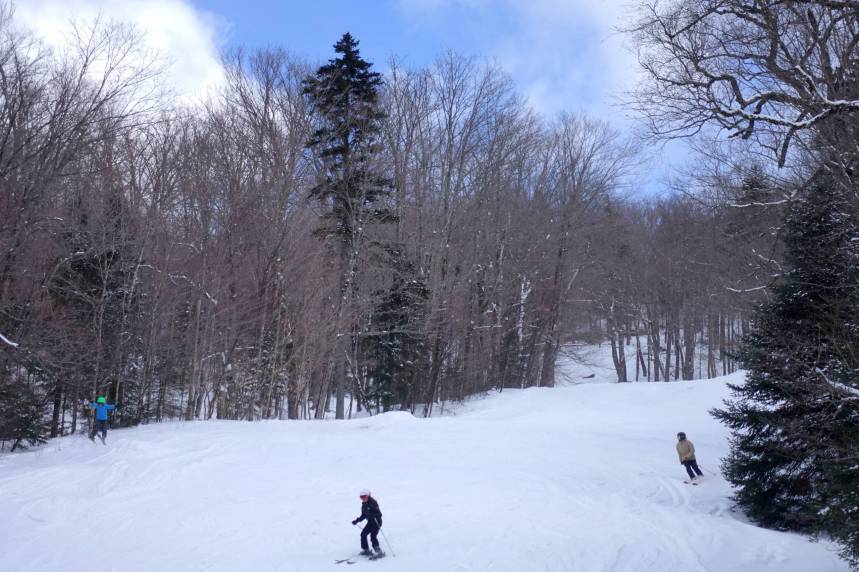 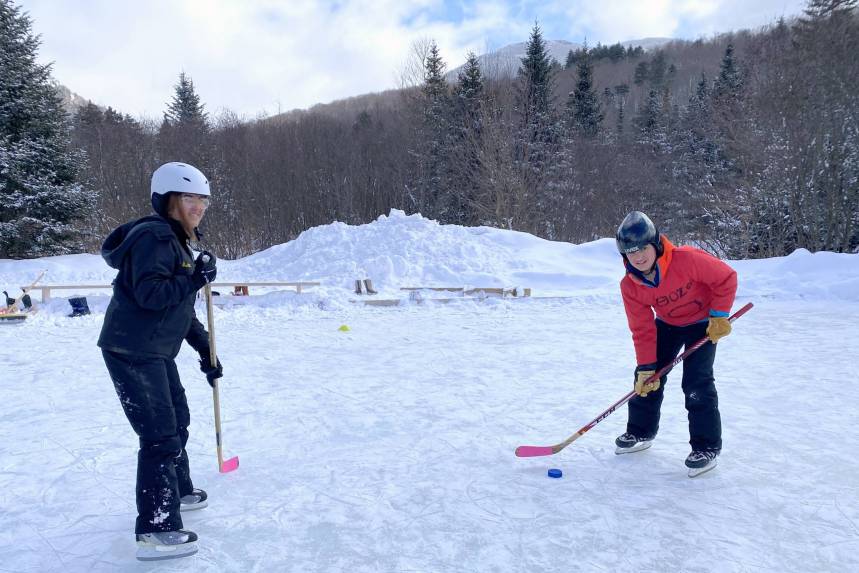 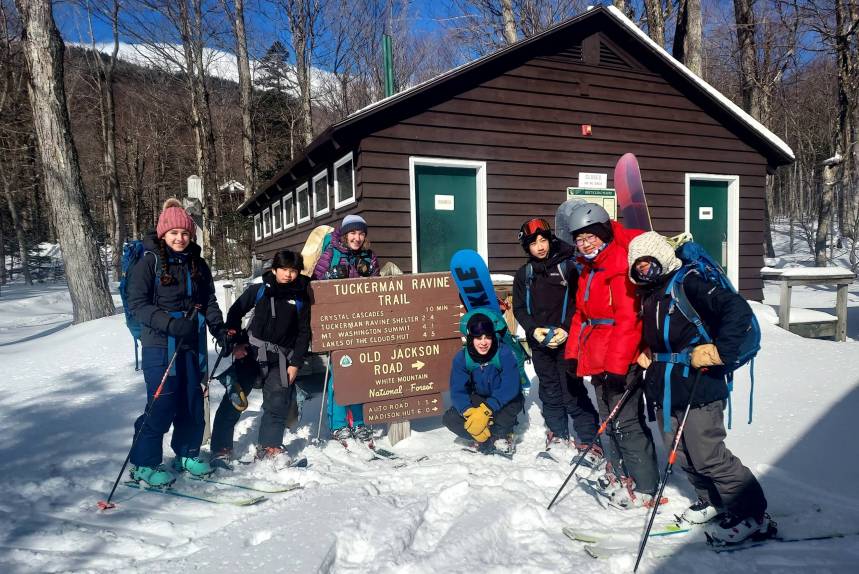 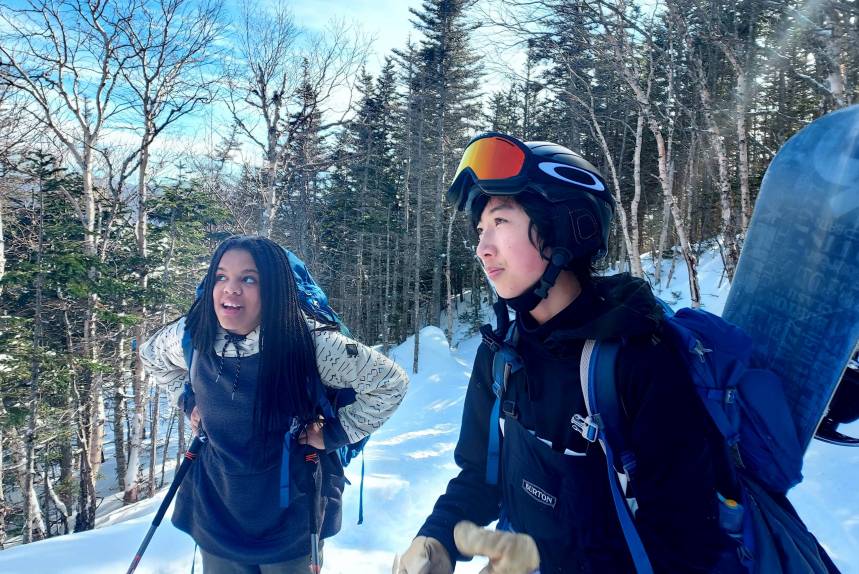 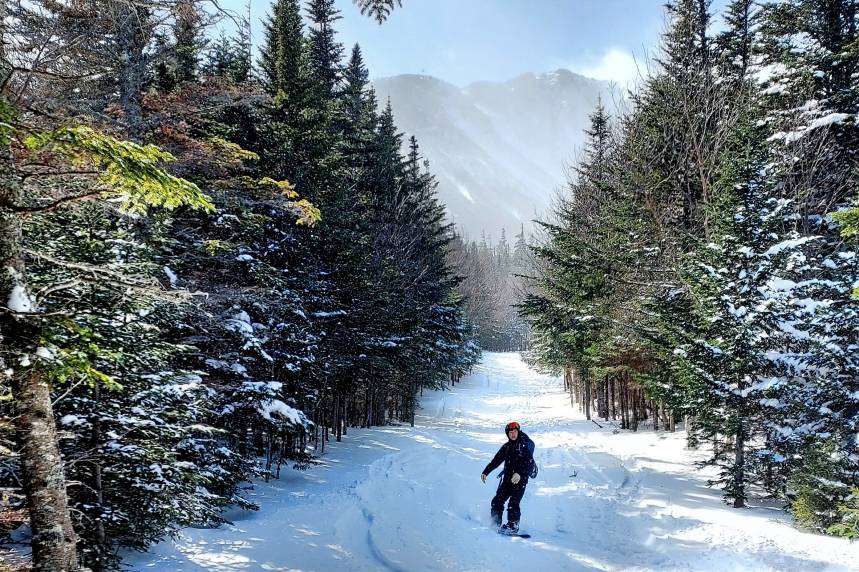 A few of our Intersession groups spent the week participating in the activities that make our snowy mountain home a hub for winter recreation. The “Winter Olympics” group learned about Lake Placid’s rich history hosting the Olympic games in both 1932 and 1980, and took part in their own mini Olympics by cross-country skiing, downhill skiing, ice skating, and practicing their biathlon skills. Meanwhile, the “Skintersession” group focused on their favorite winter activities: downhill skiing and snowboarding. The group took advantage of our campus Ski Hill to work on new skills, tricks, and jumps. During fun-filled mornings on Lake Placid’s Mirror Lake and our own campus ice rink, students in the “NCS on Ice” group learned the fundamentals of skating and ice hockey. They ended the week with games that put their new skills into practice.

In the White Mountains of New Hampshire, four hours east of the Adirondack Park, students in our Outdoor Leadership class ended the term with their own special Intersession adventure. Throughout the term, the group has been learning the skills needed to navigate the backcountry safely during the winter months, and this week they put their newfound knowledge into practice on a multi-day skiing and snowboarding trip to this rugged mountain range. We couldn’t be prouder of our students, who worked together to have a safe and fun week that they will undoubtedly remember for the rest of their lives.

For more information about the #ThisWeekAtNCS blog, contact Becca Miller at .