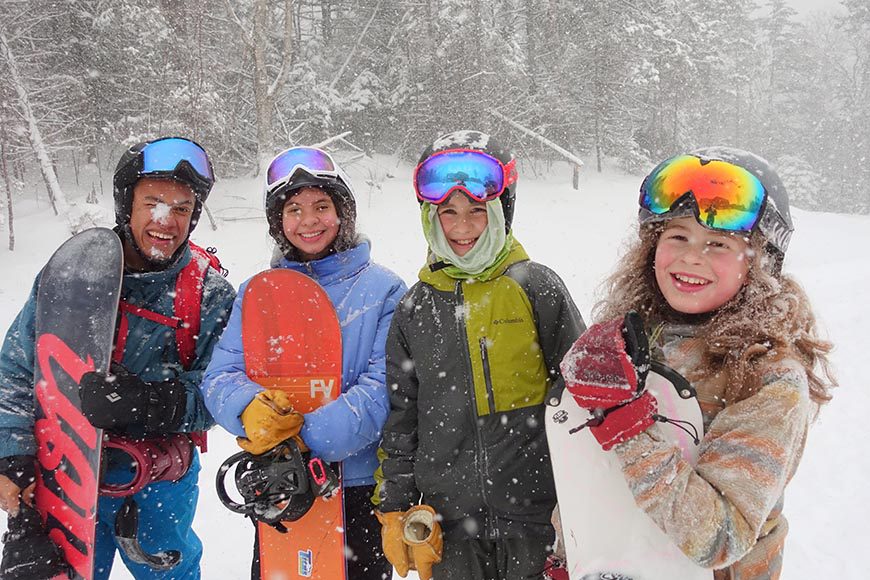 This past Friday the NCS community enjoyed a rare and joy-filled surprise when morning classes were cancelled for a snow day. With heavy snow in the forecast and drive-on students and staff staying off the roads for safety, our boarding students and faculty took a break from academic classes to enjoy some morning play time. The ski hill was opened for skiers and snowboarders, and a movie was offered in The Walter Breeman Performing Arts Center theater for those who wanted a ski break or a more mellow activity. When the snowfall stopped we’d accumulated over a foot of fresh powder that set the stage for a week filled with snowy fun.

In our arts program, some students prepared for robot battles while others saw their hard work come to fruition with their performance of the play Seedfolks. Meanwhile, down on our farm students and farmers prepared for the upcoming arrival of new baby animals.

Note: We have slightly restructured the #ThisWeekAtNCS blog. Enjoy the new blog format below! 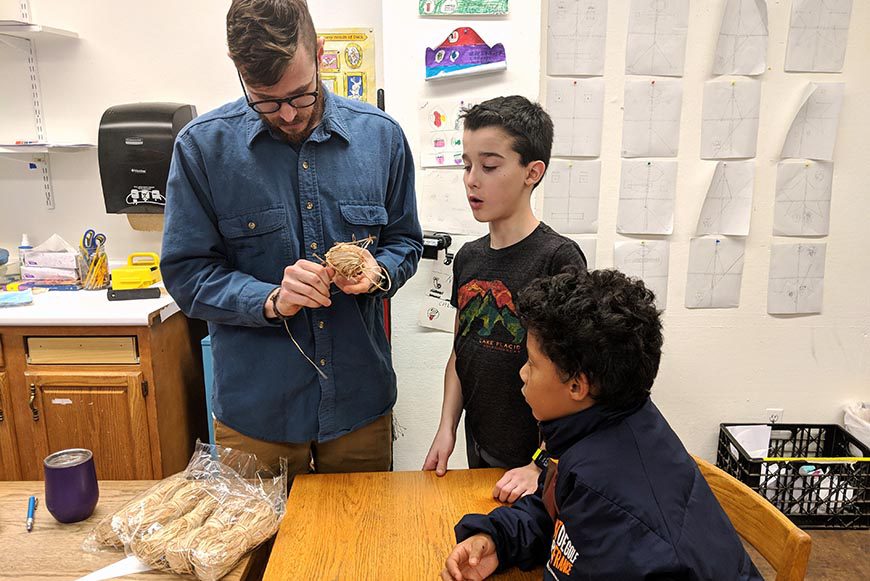 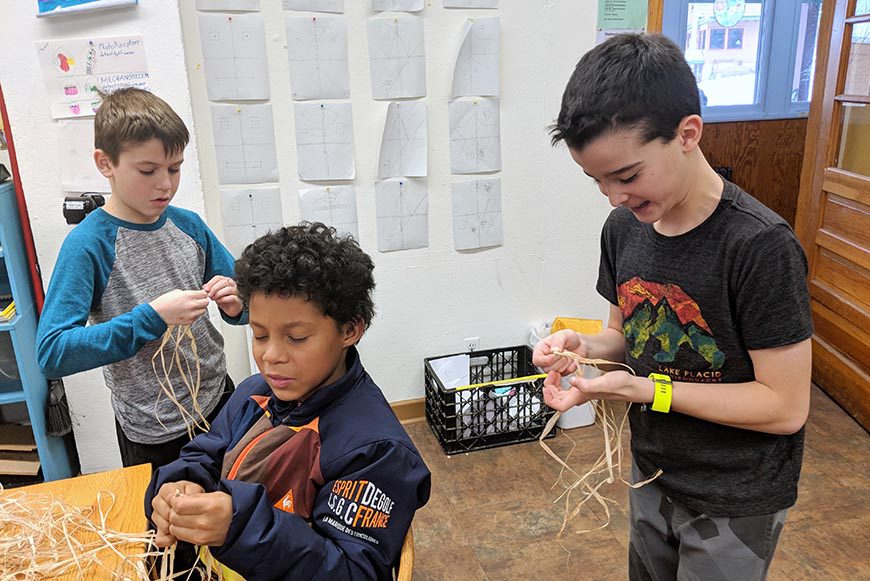 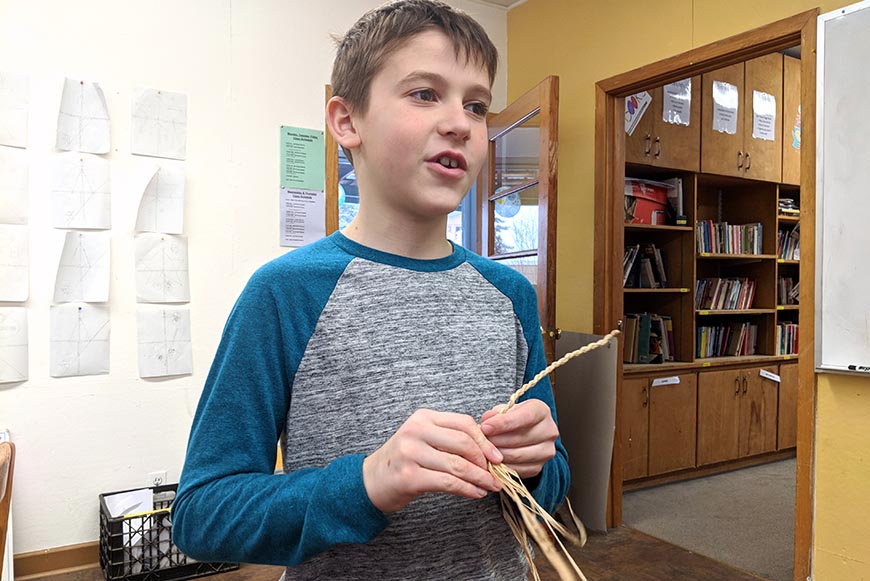 This week our 4th- and 5th-grade social studies students welcomed a special guest when 7th-grade teacher Rob stopped by to show the group how to use raffia to make cordage. For the project, which connects to the class unit on ancient South America, each student will make a length of rope to be used for their own version of a quipu—an ancient Incan device used to record information by knotting colored threads in different ways. Rob, who also works at NCS sister organization Camp Treetops, has led a similar activity with campers during the summer. 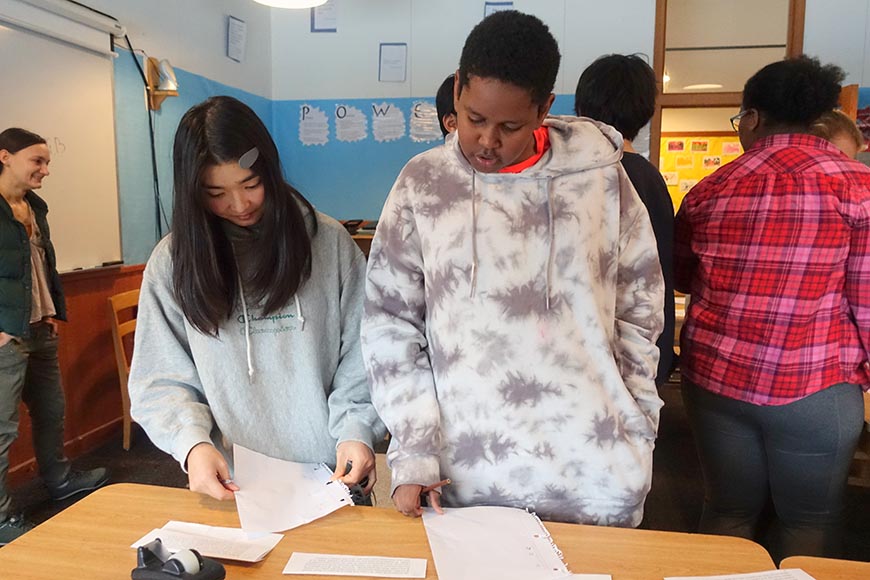 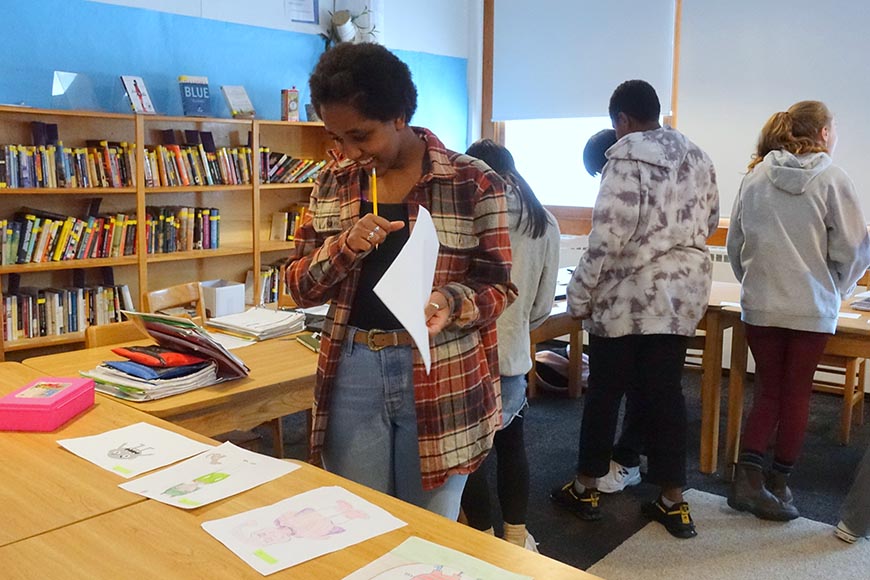 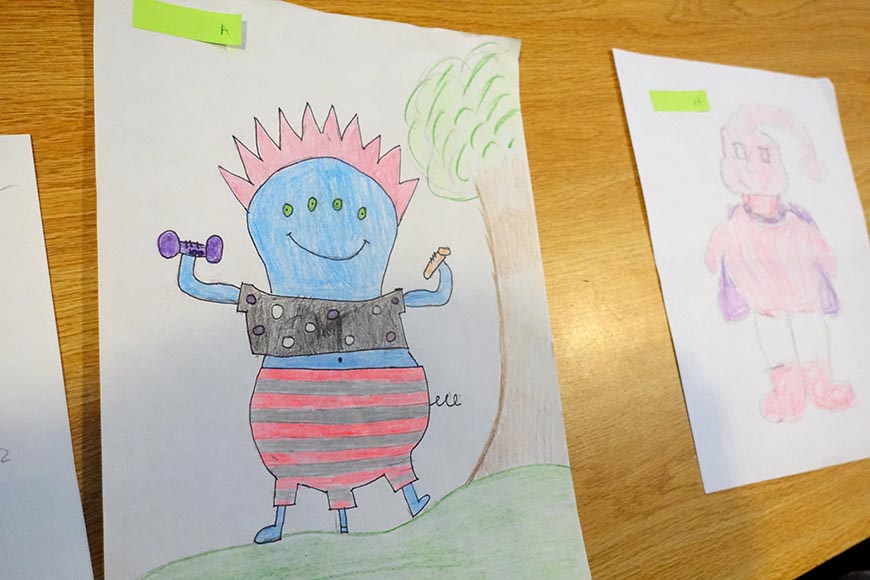 In Spanish 1 class, students participated in a fun activity using Spanish paragraphs they wrote describing an imaginary monster. Their paragraphs described their monster’s appearance, their monster’s favorite activities, and their monster’s personality. Each student then drew a picture of their monster based on that description. After each monster was separated from its description, students were challenged to match their classmates’ drawings to the corresponding description. The activity highlighted using verbs including ser, tener, and gustar, and allowed the group to practice subject/adjective agreement. 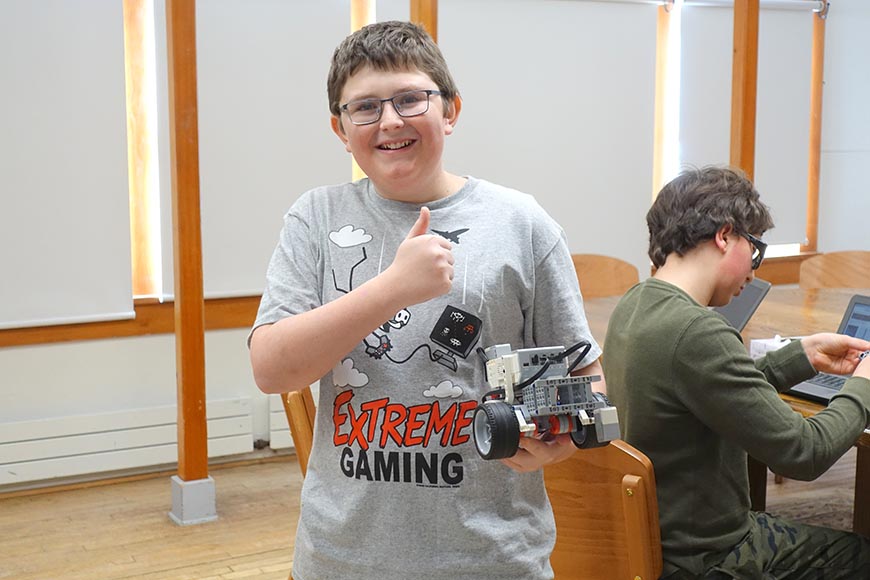 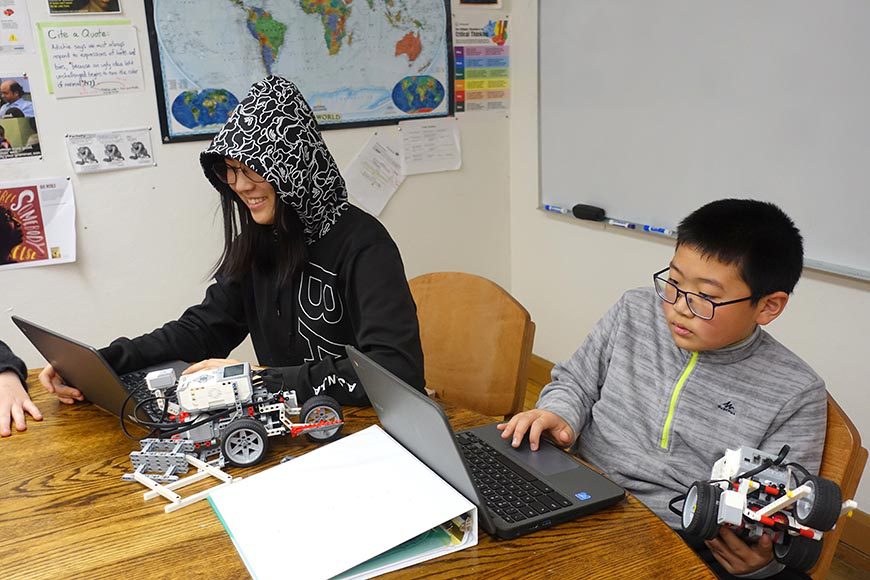 NCS offers several industrial arts classes including computer programming, music production, and robotics. This week students in our robotics class completed the basic builds of their robots using Lego Mindstorm EV3 software. Students including Jenny, Frederick, and Tristan have been programming sensors to direct the movement and actions of their robots based on distance, colors, and motion. 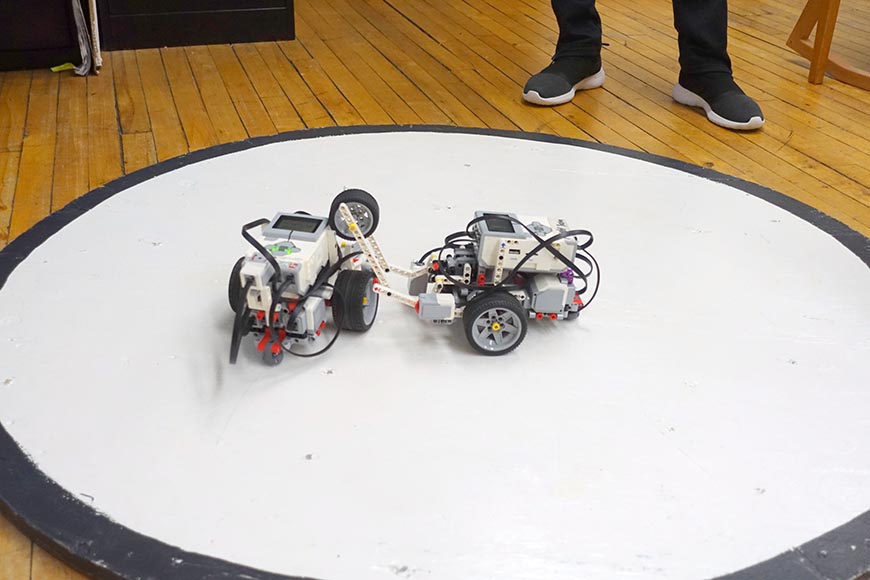 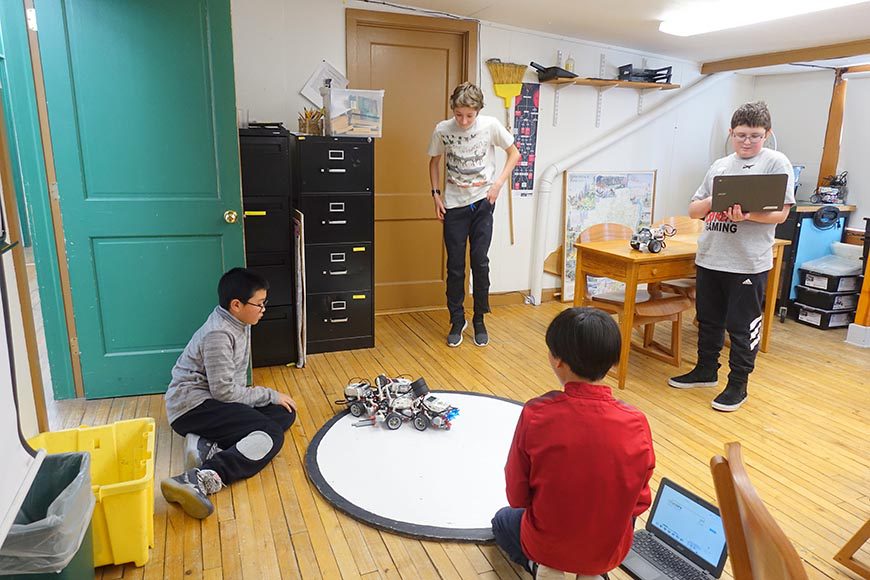 Students placed their in-progress robots on the floor for test battles, the goal of which is for each robot to push its opponents off the edge of the circle. As the term progresses students will also be programming their robots to complete complicated courses and tasks laid out by teachers Dave and Bryan. 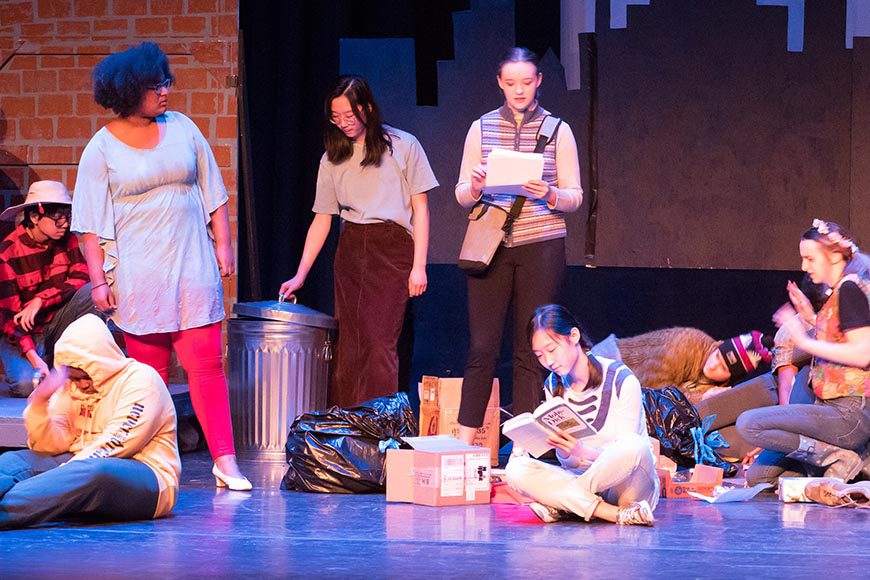 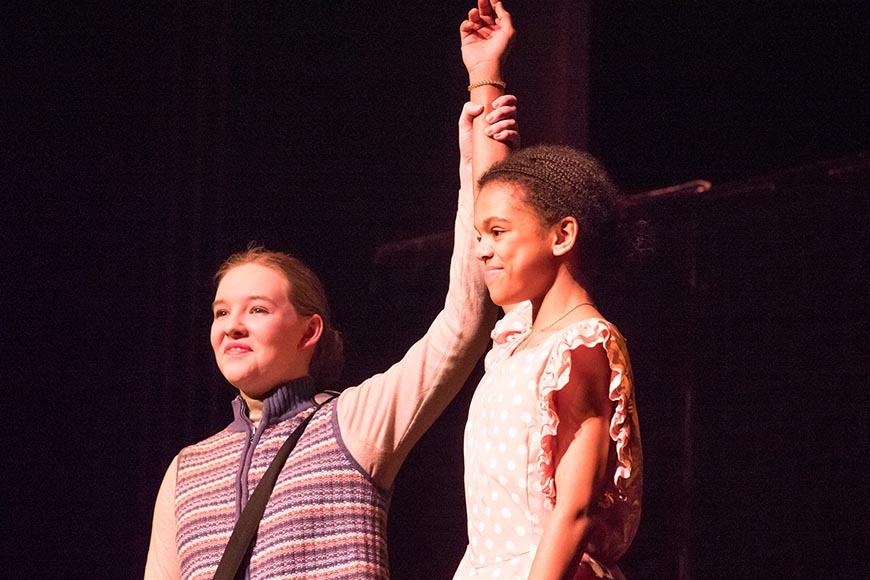 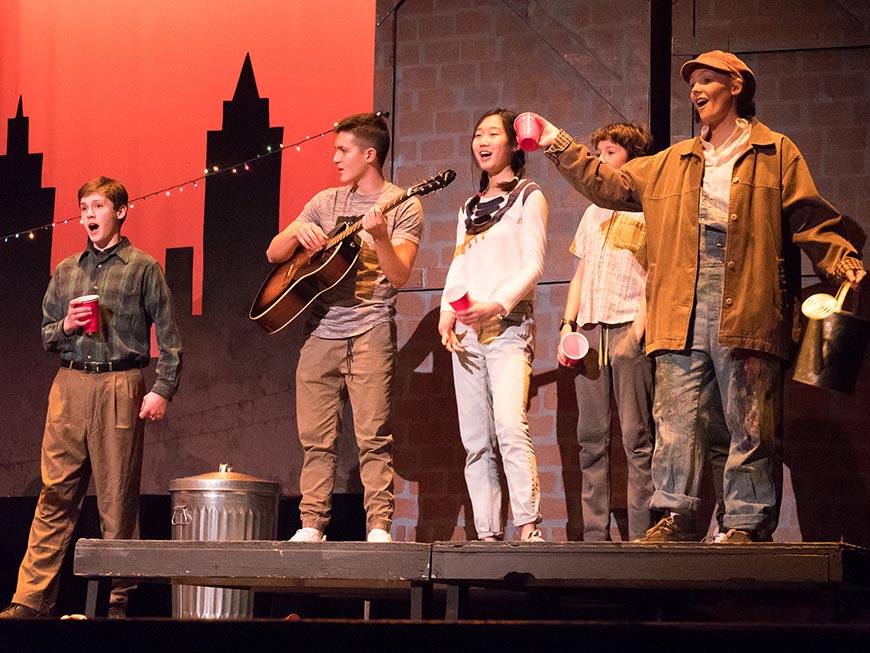 Theater teacher Courtney’s class has spent the winter term working in collaboration with Northwood School—a boarding high school located in Lake Placid—to put on a production of Seedfolks at Lake Placid Center for the Arts. Seedfolks is about a diverse group of people that join together to build a community garden. The story reinforces powerful themes of overcoming differences in polarizing times. The play, which was performed this past Tuesday and Wednesday, featured over 40 NCS and Northwood students, and saw several NCS alumni including Anja, Thebe, and Kendin take the stage with current NCS students including Tyler, Steven, Azalech, Jessica, and Rebecca. 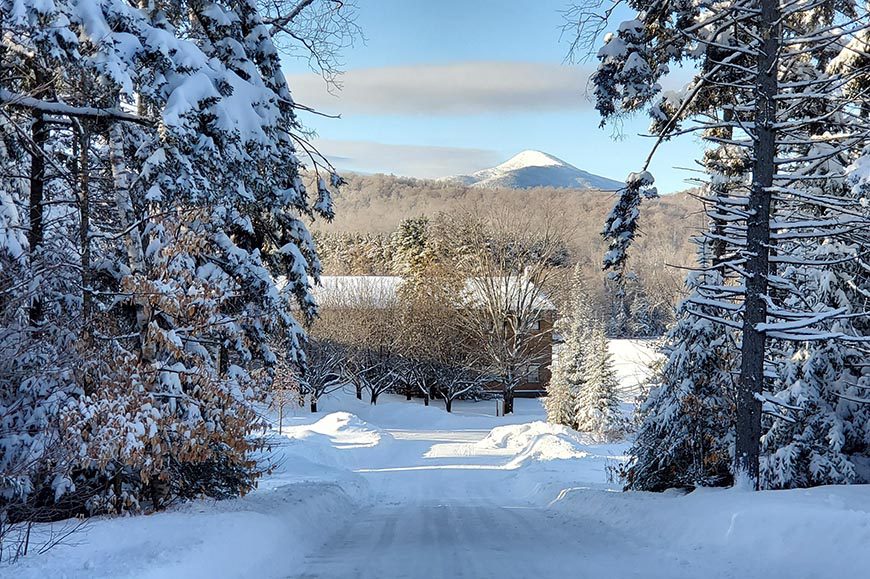 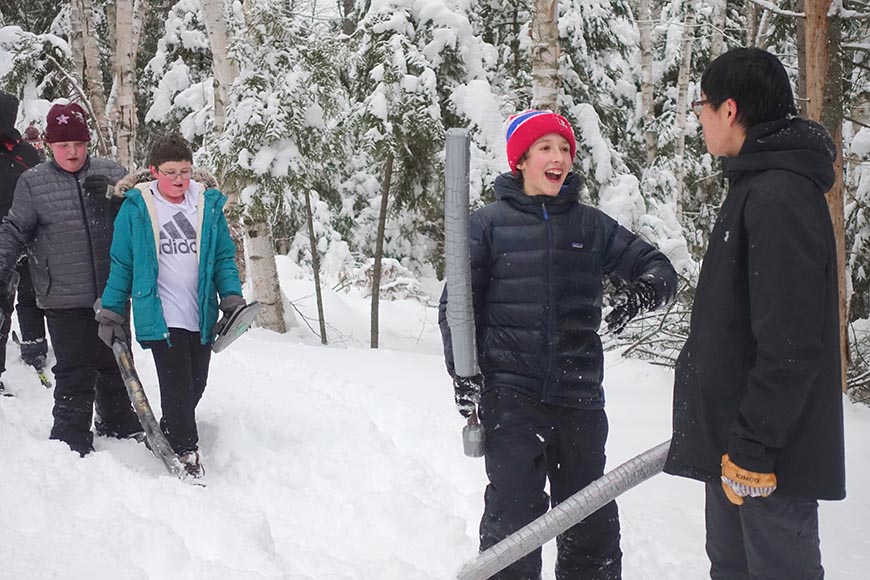 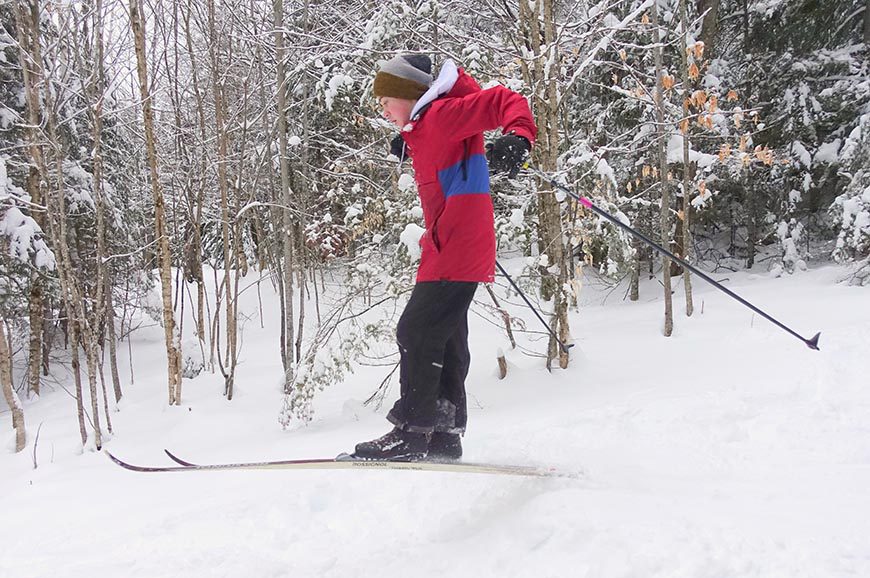 This week our campus was covered in over a foot of fresh snow, creating the perfect playground for weekend and out-time fun. One out-time this week saw students including Tianyu, Daven, and Brian participating in an NCS favorite activity; a snowy Hunger Games roleplay. Another activity brought cross-country skiers around campus trails to try out some small jumps and hills. 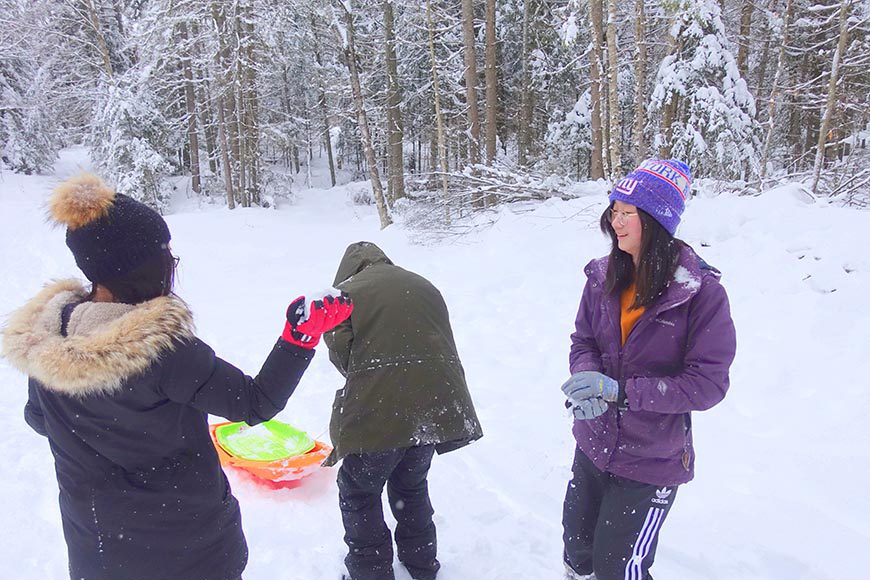 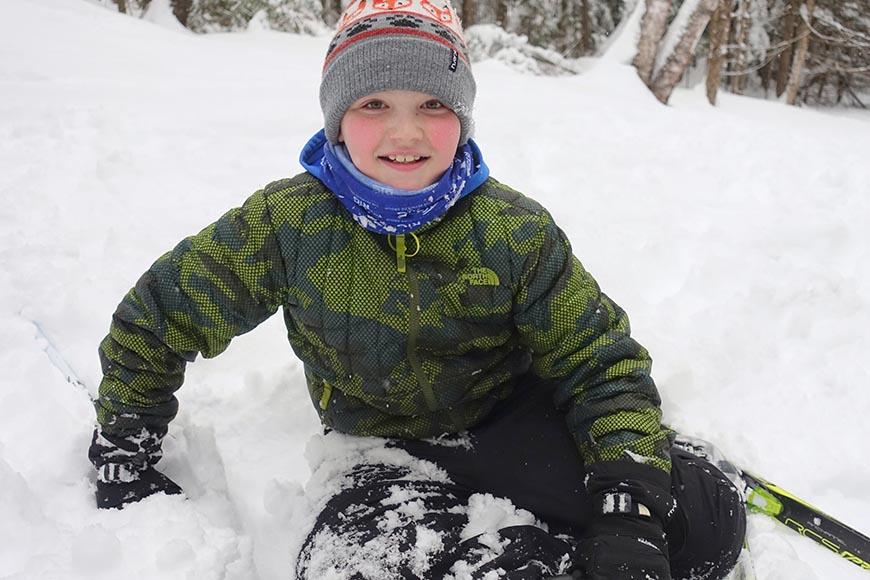 This week provided the perfect conditions for other NCS out-time favorites including sledding, snowball fighting, and snow-fort building around campus and on our sledding and lake hills. 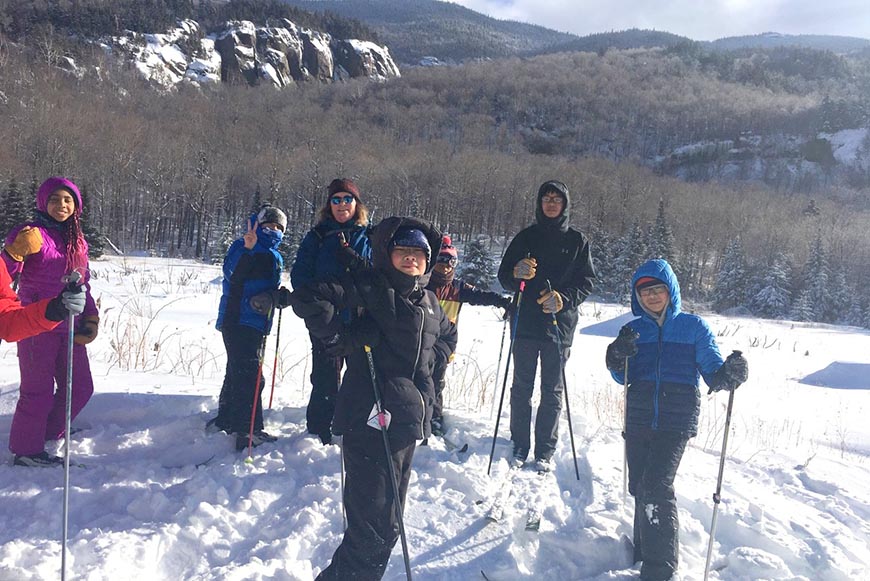 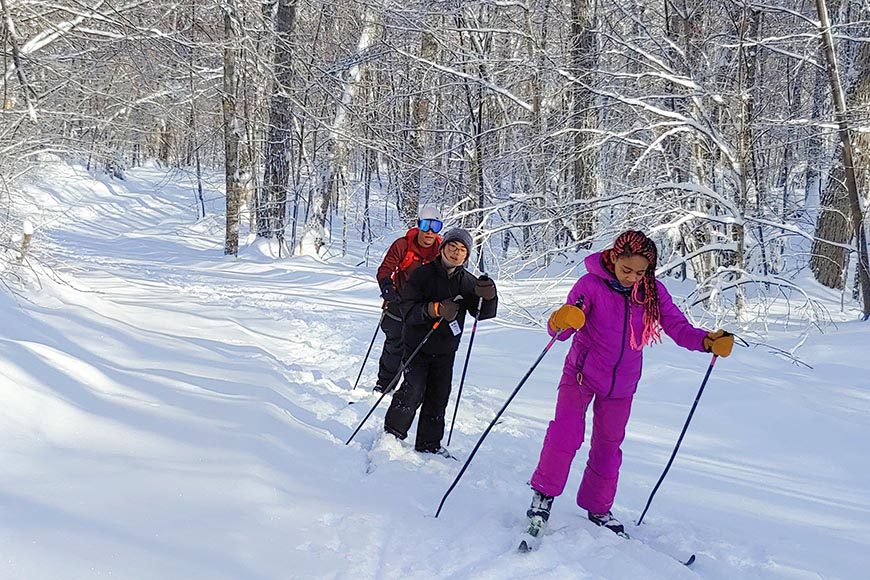 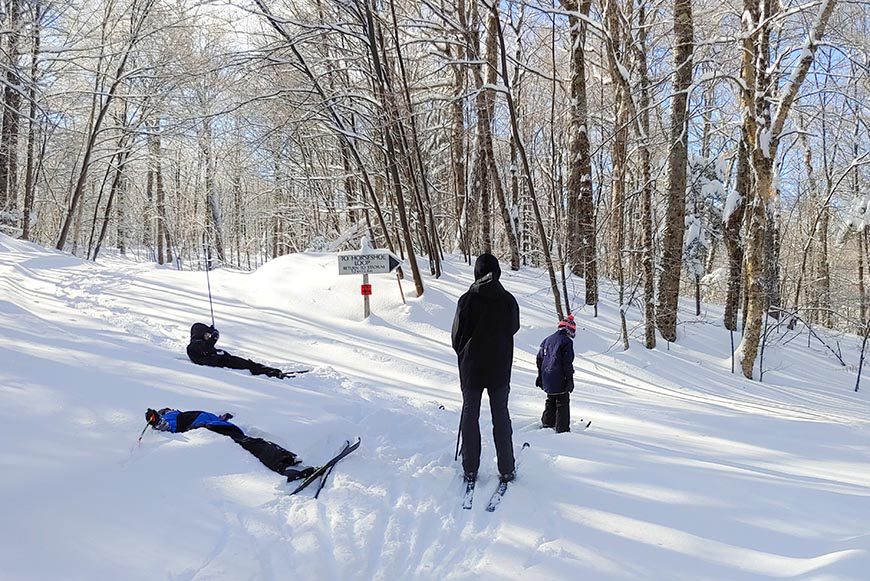 Cross-country skiers had plenty of spots to explore this week, both on and off campus. One Saturday trip saw students including Inyene, Frank, and Amon venturing out on cross-country ski adventures on the Jackrabbit Trail and Mt. Van Hoevenberg Cross Country and Biathlon Center, both of which are accessible by skis from the NCS campus. Teachers Noni and Matu led the group through thick powder, taking fluffy downhill runs and sometimes challenging uphill treks, and were rewarded with incredible views of the surrounding High Peaks. 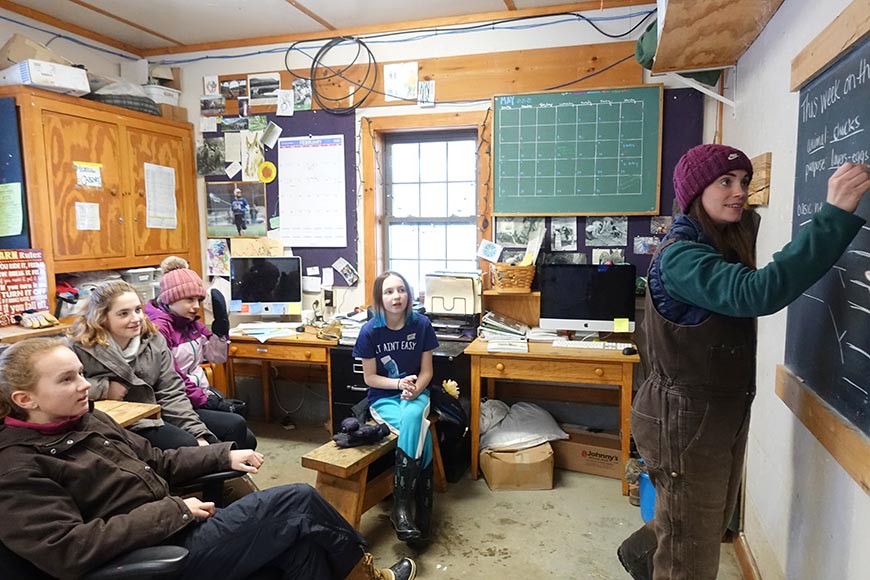 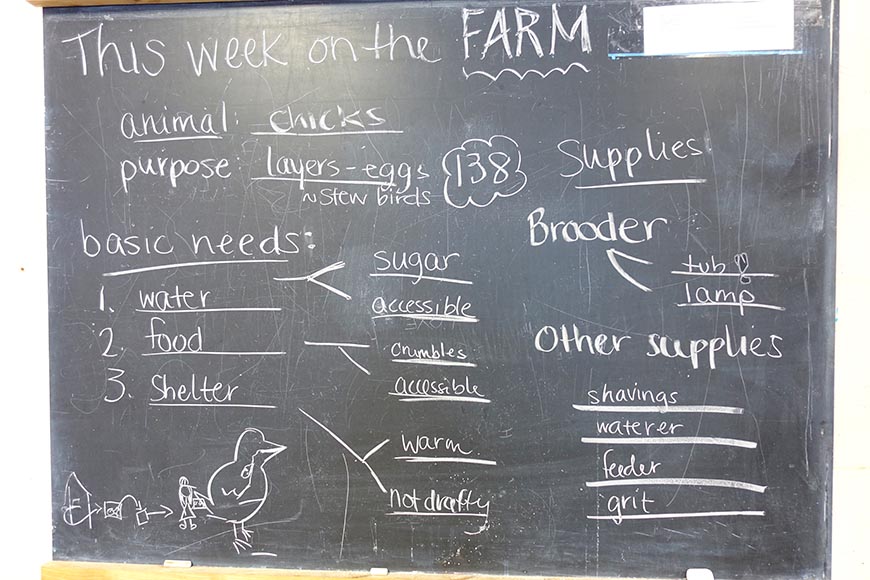 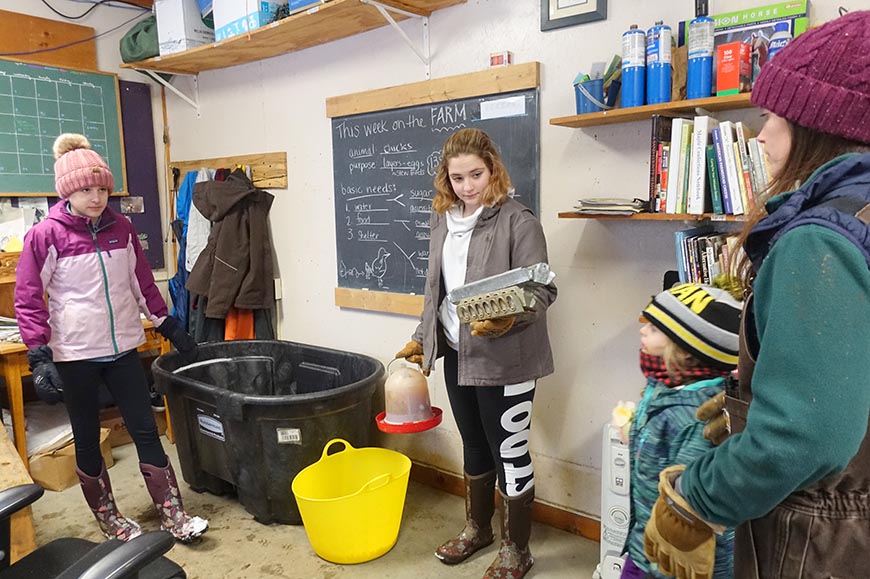 Top: Erica explains why we have chicks on the farm. Middle: Chick information board. Bottom: Abigail and Grace set up the chick brooder.

Next week we will see the arrival of over 100 baby chicks, and to make sure the barn is ready to receive the new arrivals, this past Monday Barn Manager Erica led an out-time to properly set up the space. To begin the out-time, Erica led students including Grace, Abigail, Josie, and Edie in a short lesson on why we have chicks on the farm, and what chicks need in order to be happy and healthy. The group then began to set up a brooder for the tiny baby birds. 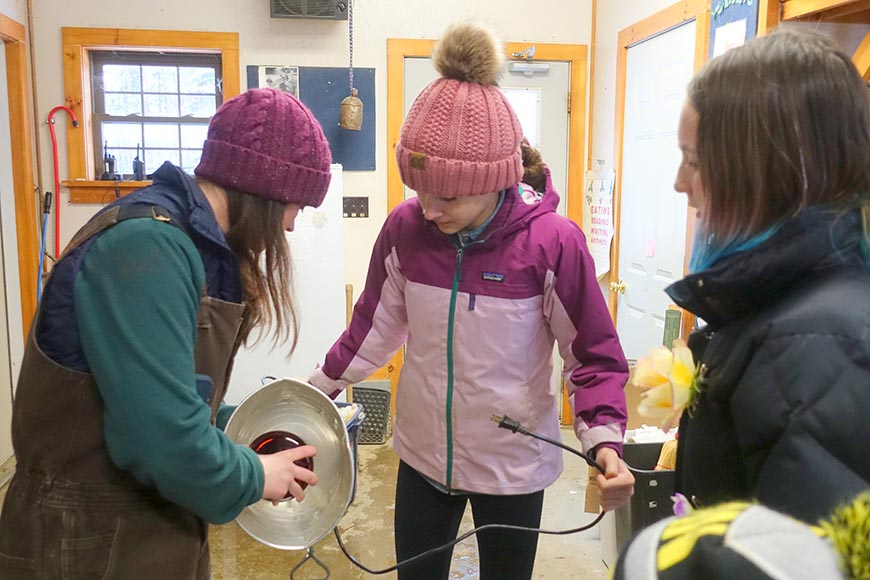 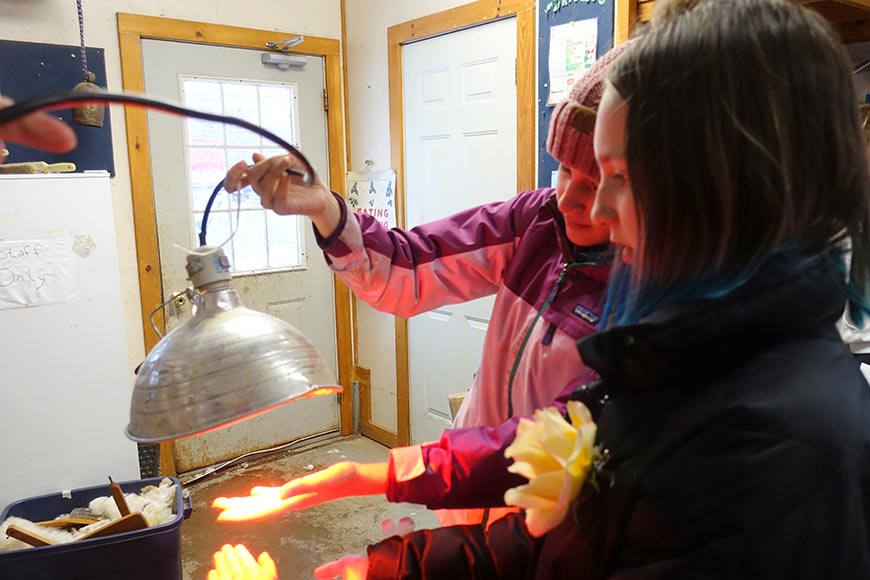 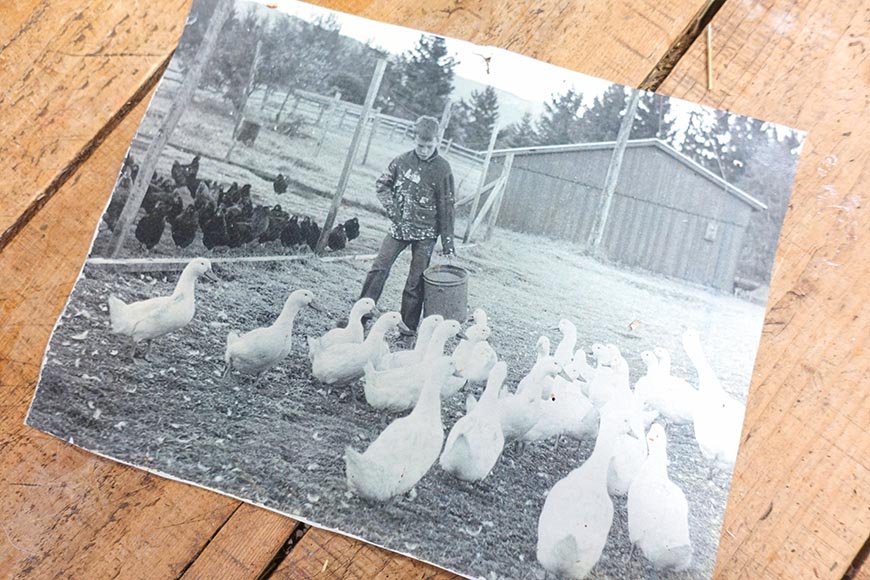 Top: Erica, Abigail, and Josie set up a heat lamp. Middle: Abigail and Josie test a heat lamp. Bottom: A historic photograph of chickens and ducks at NCS/CTT.

In addition to a brooder filled with wood shavings, the chicks will need a clean waterer, feeder, and heat lamp. Josie and Abigail worked with Erica to set up and then test a heat lamp to make sure the baby birds will be warm enough when they arrive. The students helping prepare the barnyard for the new chicks follow in a long line of students and campers at North Country School and Camp Treetops, who have been helping the community care for the animals that provide us with meat, eggs, wool, and recreation since the school’s inception in the 1930s.

Check back next week to see what we’re up to on our mountain campus.

For more information about the #This Week At NCS blog, contact Becca Miller at .