It was a day filled with new experiences and plenty of sharing, laughing, and learning. Our ten explorers from the Hempstead, NY, school left their Rock-E House basecamp and hit the trail early this morning. The destination: a rocky mountain overlook called Trouble, which can be seen right from the North Country School and Camp Treetops campus. 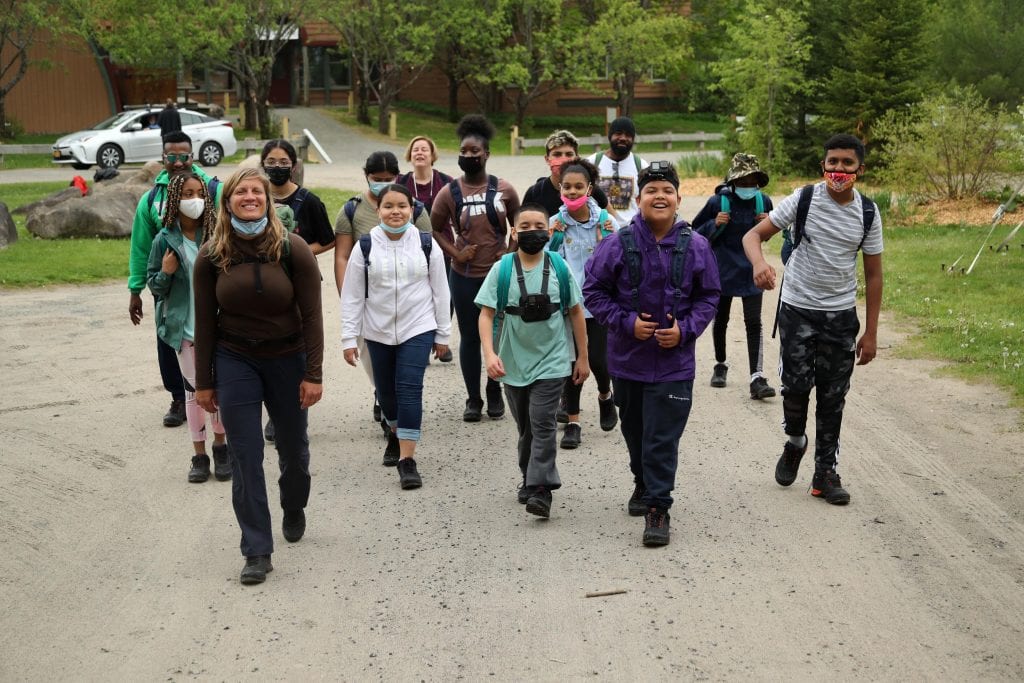 The group walked and climbed their way through lush, green forests before emerging out onto the large streak of open rock. Some clambered right up the steep stone without a second thought while others hesitated then, encouraged by their peers, made the ascent themselves. 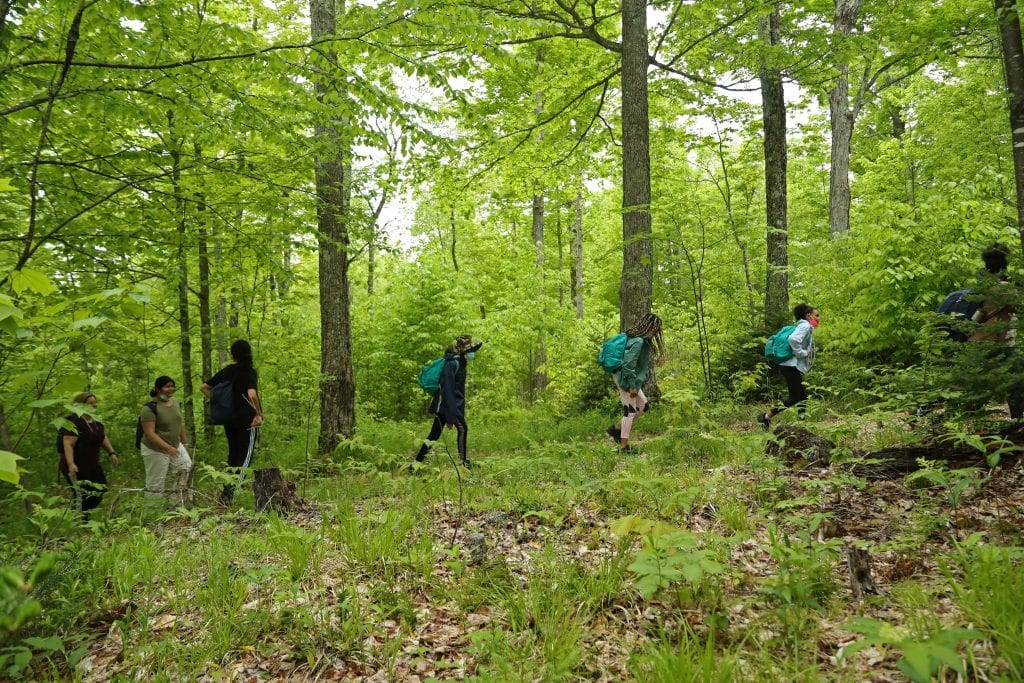 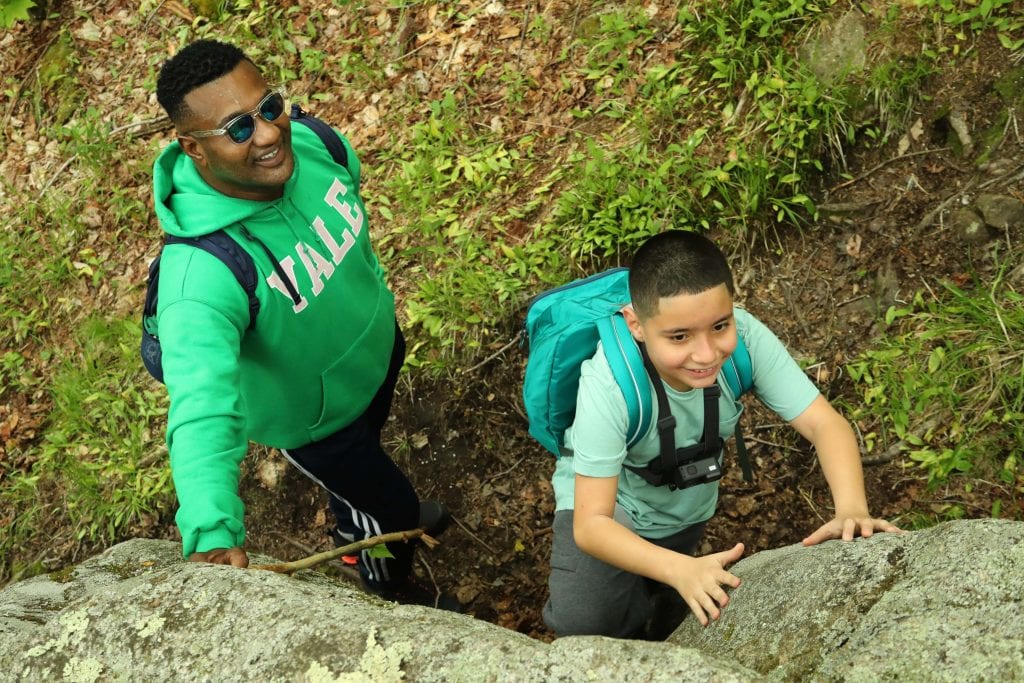 The view from Trouble includes the nearby Olympic bobsled track as well as some of the region’s tallest mountains. Conversations shifted from awe to appreciation as the young hikers relaxed and called loved ones to share the amazing experience with them. Mumbles and grumbles—a common side-effect of steep Adirondack trails—were no more. In fact, several kids declared that they were ready for a bigger challenge! Well, they’re in luck because Wednsday is rock climbing at the Crag, followed by a hike to Balanced Rocks on Thursday. 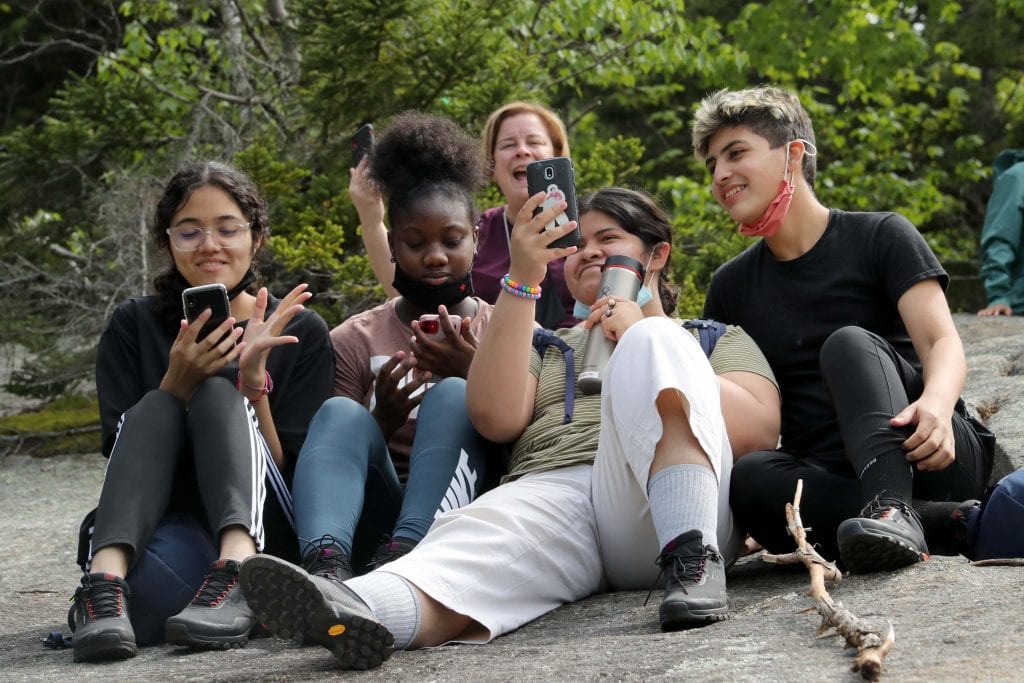 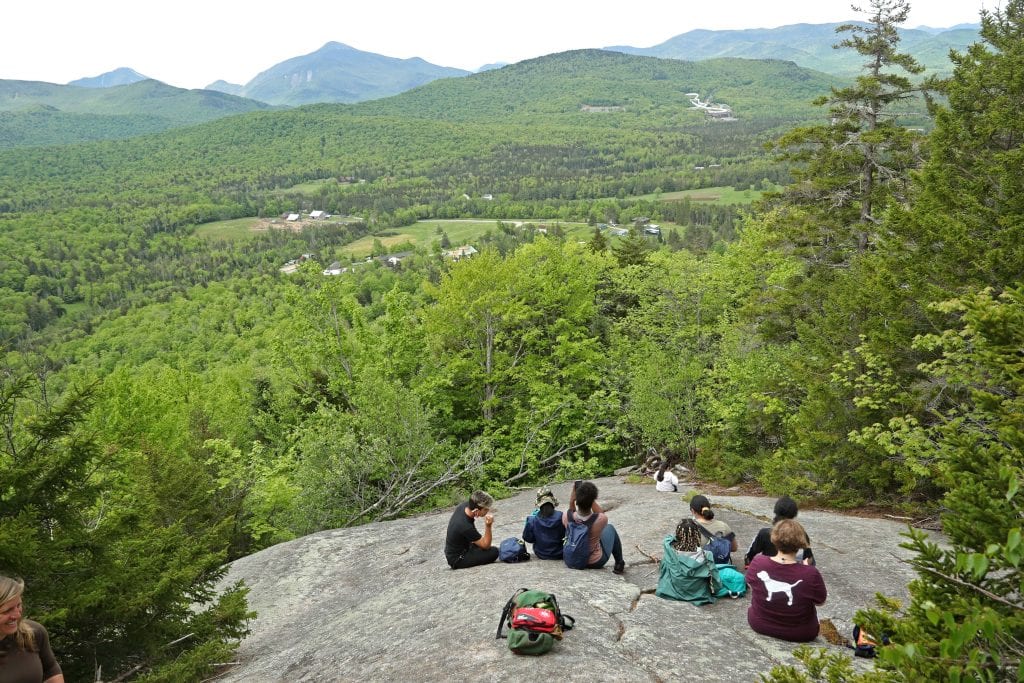 After lunch, everyone headed to the greenhouses, where our Garden Manager, Tess, introduced them to our Edible Schoolyard. Climbing a mountain was certainly an adventure, but it was nowhere near as daring as taking a big chomp of rhubarb. The delicious plant’s brightly colored stalk is beautiful and perhaps one of the most sour things you can bite into. Tess explained how rhubarb is used to make various drinks and desserts, then everyone helped harvest a basketful of it for use in our Teaching and Learning Kitchen. After a quick stop at the Aeroponics room, where cilantro was collected, everyone did another taste test in the Children’s Garden. The black-licorice-tasting fennel was a huge hit; the oniony chives, not so much. Herbs in hand, the group made its way into the kitchen, when Edible Schoolyard teacher Elie taught them how to put all of that fresh produce to use. 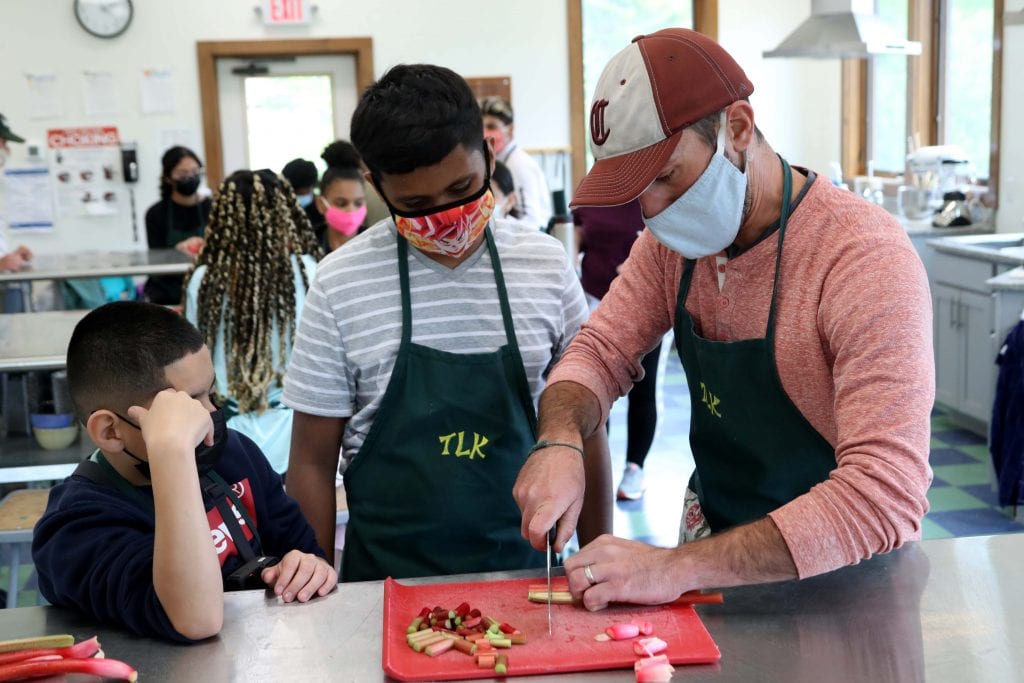 The next adventure of the day had four legs and hooves. Barn Manager Erica showed up with three horses, and everyone took turns learning to ride in our riding ring. The children learned some basic commands and guided the animals, with assistance, around the ring. Some kept things at a mosey while others got their horses jogging along. Off on the side of the ring, a different experience was being had as the students there were meeting a small Adirondack frog carried gingerly to the riding ring by one of our faculty children. 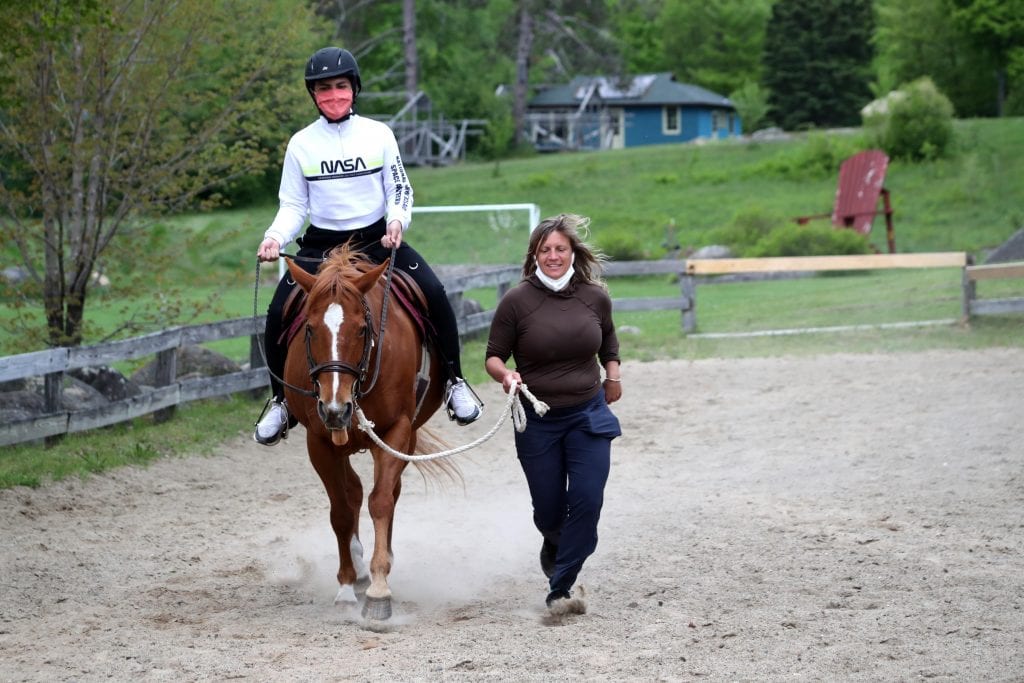 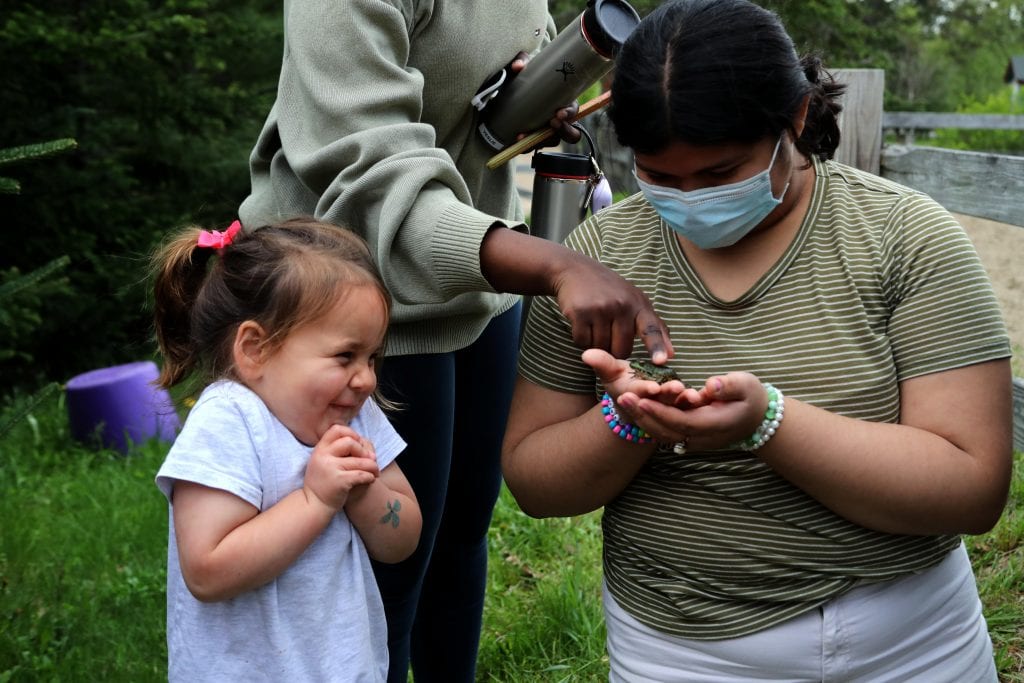 At volunteer barn chores, students helped run a flock of sheep from one pasture to the next, fed the turkeys, and watered and fed the lambs hay they hauled from the barn loft. Several children spent the time cuddling and playing with our friendly silver-colored barn cat, Mercury.

In the evening, everyone settled into Adirondack chairs on the lawn overlooking Round Lake for a talk by Dr. Thomas Easley, who shared his own relationship with the outdoors, as well as his journey as an educator, thinker, and advocate for social and environmental justice. After a full day, under a bright starry night, students snuggled into their bunk beds and fell asleep to the sound of peepers. Wednesday’s adventure will include rock climbing, canoeing, and swimming in Round Lake.
AWP Day 1 Photo Gallery
2021-06-05T16:15:33+00:00Access Wild Places|